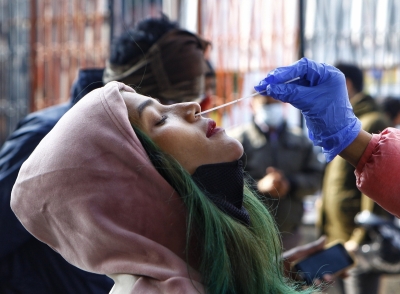 Imphal, Jan 15 (IANS) The Covid-19 cases in poll-bound Manipur have been rising with the positivity rate of the contagious virus increasing from 4.1 per cent to 7.1 per cent for the past five days, officials said on Saturday.

A Manipur Covid Surveillance Officer, Somorjit Ningombam said that all the seven Omicron infected patients, recently found in Manipur, were discharged from the hospital after getting their report negative.

On December 26, a 48-year-old man from Manipur, who had recently visited Tanzania, tested positive for Omicron, becoming the first case of the new Covid-19 variant in the entire northeast region.

An analysis by the IANS of Manipur’s National Health Mission (NHM) reports said that the daily positivity rate of 4.1 per cent on January 10 rose to 7.1 per cent on Friday night.

The daily positivity rate increased to 8.6 per cent on January 12.

According to the Manipur NHM reports, 57 fresh Covid-19 cases were reported on January 10 and as per the latest report on Friday night, 112 fresh cases registered from among the civilians excluding the security personnel.

The NHM report said that 157 security personnel, mostly central armed force troopers, were tested for Covid-19 positive in between January 10 and January 14 night.

The elections to the 60-member Manipur Assembly would be held in Manipur in two phases on February 27 and March 3.

The counting of votes would take place on March 10.

The Election Commission officials in Manipur said that the poll panel after meeting with the officials of the central and state government would decide if the ban imposed by it on public rallies and road shows should continue or to be modified.

While announcing the poll schedule for Uttar Pradesh, Uttarakhand, Goa, Punjab and Manipur on January 8, the EC had announced an unprecedented step by prohibiting public rallies, road shows and physical campaigning programme till January 15 in view of rising Covid-19 cases.