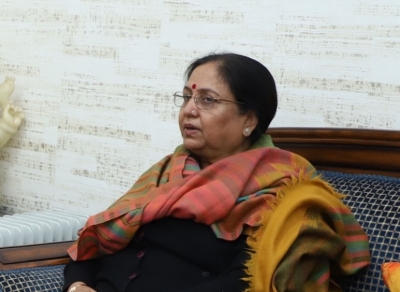 A surprise candidate is Agra’s former mayor Baby Rani Maurya who last year resigned as the governor of Uttarakhand, to play a more active part on the national scene.

Some groups have criticised her candidature saying a former Governor should not have been fielded.

The BJP, as expected, has not bothered to appease the Dalits or the Muslims.

The Agarwal community of Agra has criticised the BJP for not giving a single seat to the Agarwals whose population is estimated to be around 3 lakh in the district.

At a meeting on Saturday afternoon in a hotel, half-a-dozen organisations representing the community announced to boycott and oppose the BJP in the coming elections.

Their ire is particularly directed against sitting MLA Purushottam Khandelwal who has been given the ticket.

Khandelwals constitute a small percentage of Agra’s population. Agra north is considered a bastion of the Agarwal community.

The Bahujan Samaj Party on Friday announced its candidates for the nine seats of Agra, called the Dalit capital of north India.

Political pundits guesstimate a loss of at least two seats this time, but the BJP election machine is all buoyed up and hopes to steamroll all opposition as the campaign picks up momentum.

The Opposition has questioned the BJP on its failure to clean up the Yamuna and build a barrage downstream of the Taj Mahal.

Samajwadi Party leaders said the BJP has failed to fulfill its promise of a High Court bench in Agra, as per the recommendation of the Jaswant Singh Commission.

For the BJP, the prime worry is a low turn-out of its voters due to the Covid-19 pandemic.

“We have mobilised our party workers and geared up th e election machinery which will draw out all our voters. The mood is upbeat,” said sitting MLA Purushottam Khandelwal.