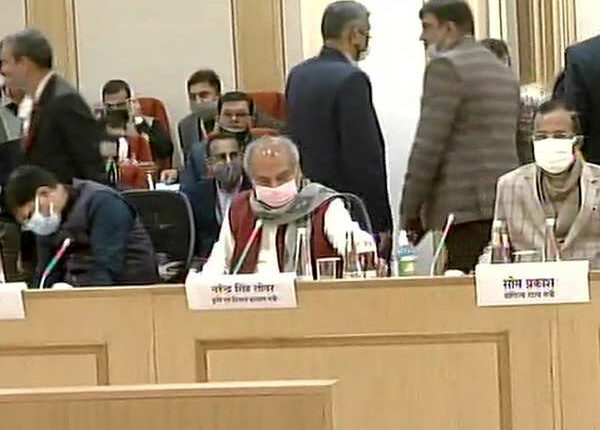 The protest of farmers continues today on the borders of Delhi for the 58th consecutive day. Meanwhile, the 11th round meeting in New Delhi was also inconclusive. The next date of the meeting is not yet decided. During the meeting, Agriculture Minister Narendra Singh Tomar said that 11 rounds of talks have been held but no decision has been reached so far. He said that the best proposal has been given by the government, the farmers should consider it.

Narendra Singh Tomar said, “I am saying this with a heavy heart that it is very unfortunate that no positive response came from the farmers.”

Tomar told the farmer leaders that the government is grateful for your cooperation. There is no fault in the law. We made a proposal in your honor. You could not decide. If you reach a decision then inform. We will discuss this again.

After the meeting, the farmer leaders said that we stand on the demand to repeal the law, the movement will continue. The next date of negotiation is not fixed.

The meeting of the government and farmers started at around 12:45 pm. At the beginning of the meeting, Narendra Singh Tomar expressed his displeasure over the fact that the farmers’ organizations make their decision public in the media, while the was to be held on the next day.

After the meeting of about 15 – 20 minutes, the two sides held their separate meetings. Farmer leaders came out of the meeting at around five o’clock.

In the 10th round of meeting, on January 20, the central government had proposed to the farmer leaders that it is ready to postpone the agricultural laws for one and a half years. During this time, a committee of representatives of the government and farmer organizations will discuss these laws in detail and will find a way out.

This proposal was rejected by the farmer leaders after a long meeting on Thursday. United Kisan Morcha issued a statement saying, “The proposal made by the government in the General Assembly yesterday was rejected. The talk of repealing the three central agricultural laws altogether and enacting a law for MSP profitable on all crops for all farmers was reiterated as the main demands of this movement.”