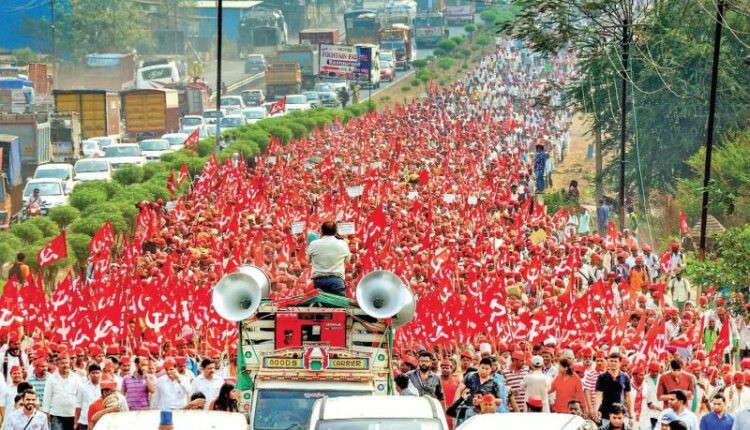 As many as 50,000 farmers, led by the All India Kisan Sabha (AIKS), a peasant front affiliated to the Left, have reached Mumbai’s Azad Maidan today just before dawn. The farmers have completed a distance of almost 180 kms walking from Nasik all the way to Mumbai.

They had planned to gherao the Vidhan Bhavan in order to press their demands to the government, which includes waiving off agricultural loans and a higher MSP on their crops. The initial plan was to march to the Azad Maidan today in daylight. However, after an appeal from Maharashtra’s chief minister, Devendra Fadnavis, to not hold off the traffic on Monday citing important school exams, the farmers decided to complete the rest of the march during midnight ensuring no traffic halts.

The entire march, as well as their consideration towards the school students, have earned a lot of praise from social media as well as from the locals in Mumbai. Plenty of Mumbaikars welcomed the farmers with snacks and water at Vikhroli, Mulund and Ghatkopar. A number of political parties, including the Shiv Sena, Congress, NCP and MNS have extended their support to the farmers.

Here is a list of the 5 most important demands of the farmers:

The protest from the farmers is likely to be one of the biggest challenge for PM Modi and his government ahead of the 2019 elections. As many as 800 million Indians are dependent on agriculture, directly or indirectly, for their livelihood and form the most crucial support base for any political party.