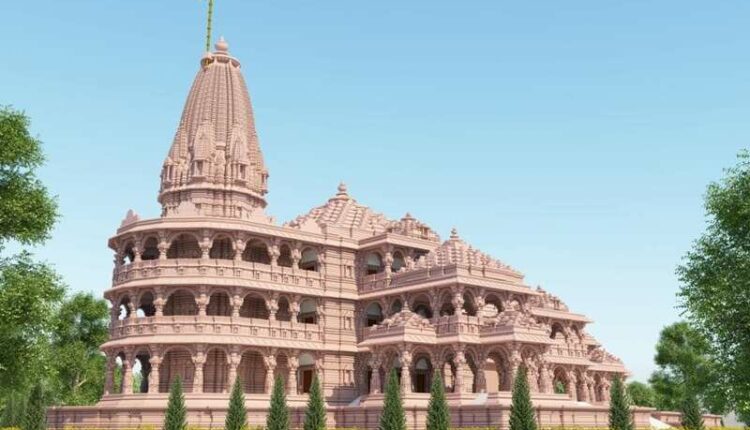 Today is the day of Ram Kaj. The disputed structure was built in Ayodhya at the behest of Babur 492 years ago. In 1885, for the first time, this case went to court. In 2019, the Supreme Court ruled in favor of Ramlala. Just nine months after this, Bhoomi Pujan (Land worship) is going to be done for the Ram temple in Ayodhya.

Its foundation will be laid at 12:30 pm by Prime Minister Narendra Modi. The Modi, whose party BJP repeated the same promise in 8 out of 10 Lok Sabha elections … And the most beautiful thing is that the first invitation was sent to Iqbal Ansari, who was a supporter of Babri Masjid.

After independence, Modi will be the only Prime Minister who will be in the court of Ramlala while holding this post. Before him, Indira Gandhi, Rajiv Gandhi and Atal Bihari Vajpayee and Narendra Modi have reached Ayodhya as Prime Minister, but could not see Ramlala.

135 are saints out of 175 guests, all will be given silver coin of Shriram Darbar

Because of COVID-19, only 175 people have been invited to the Bhoomi Poojan ceremony. These include 135 saints from a total of 36 spiritual traditions of the country. The family and others of the rest of the kar sevaks (someone who offers free service for religious cause) have been invited. Every guest who attends Bhoomi Poojan will be given a silver coin of Shri Ram Darbar. The coin will be given by the temple trust.

PM Modi will stay in Ayodhya for 3 hours

09:35 pm: The Prime Minister will depart from Delhi.

11:40 pm: PM Modi and CM Yogi will go to Hanumangarhi, then to Ram Janmabhoomi campus.

12:30 pm: Worship program will begin. During this, there will be Shila Puja, Bhoomi Puja, and Kurma Shila Puja.

12:44 to 12:45 pm: The main puja will take place in Abhijeet Muhurta (time of the day which gives auspicious results) of 32 seconds. It is believed that Lord Rama was born in this Muhurta (time). PM Modi will lay 40 kg of silver brick as the foundation during this period.

2:20 pm: Modi will depart for Lucknow

Advani, Joshi, Rajnath will not attend the program

Ayodhya decorated with orchids from Thailand and Aparajita flowers from Bengaluru

Ayodhya is decorated with 400 quintal flowers. Orchids are sourced from Thailand and Aparajita ( Asian pigeonwings) flowers from Bangalore. At the same time, orange and red-colored double toned marigold flowers have come from Kolkata. The Bhoomi Poojan site and the surrounding temples are decorated with them. In addition, flowers have been used to make Rangoli at more than 50 places from Saket PG College to Naya Ghat.

More than two crore ladoos packets will be distributed

After Bhoomi Poojan, Shri Ram Janmabhoomi Teerth Kshetra Trust has made `1.11 lakh laddus for prasad. Apart from this, Mahavir Trust of Patna had made one crore Ramladdu packets. Apart from these, MP Lallu Singh has made packets of three and a half lakh laddus.

More than 2 thousand major pilgrimage centers, places of national importance, and sacred rivers and water from holy rivers have reached Ayodhya for land worship. Soil, water, and other items have reached Ayodhya from the shrines of all the sacred places and sacrificial heroes, including Badrinath Dham, Chhatrapati Shivaji Maharaj’s Fort Raigad, Sri Ranganatha Swamy Temple Tamil Nadu, Sri Mahakaleshwar Temple, the birthplace of Hutatma Chandrasekhar Azad and Balidani Birsa Munda. Apart from this, about one quintal silver bricks have also been donated for use in the foundation of Ram temple.