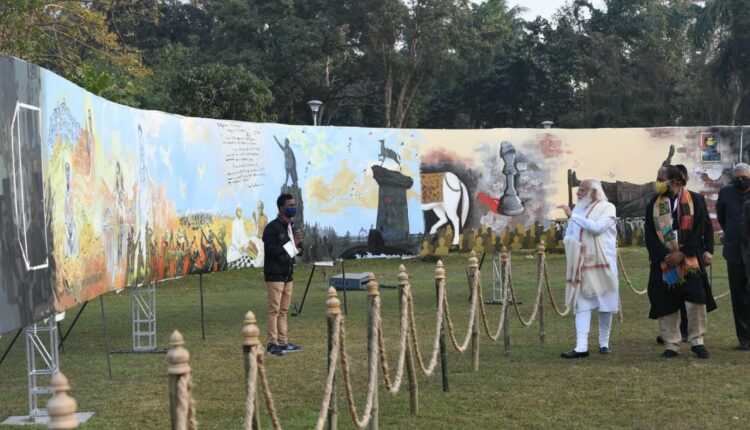 His presence also gives a positive sign for the upcoming assembly election which going to hold in west Bengal. The Prime Minister presided over the inaugural function of the “Parakram Diwas” celebrations at Victoria Memorial in Kolkata.

He addressed, “Netaji Subhash Chandra Bose used to count poverty, illiteracy, disease, among the biggest problems of the country. He also said that these problems of can be solved only if society comes together. India has became a powerful nation and proving its powerful avatar from LAC to LOC. The world is witnessing the strengthened Bharat that was once envisioned by Netaji.”

“In today’s time, India is giving a befitting reply wherever attempts are made to challenge its sovereignty. PM Modi also inaugurated commemorative stamps and coin on Netaji Subhash Chandra Bose’s 125th birth anniversary.”

To remember and honour Netaji’s selfless contribution and sacrifice to the Nation, the Government of India has decided to celebrate his birth date on 23 January every year as ‘Parakram Diwas’. He is the icon of strength, dedication, patriotism, and indomitable spirit everyone should learn the true meaning of dedication and spirit from his character.

The 125th Jayanti celebrations of Netaji Bose have captured the imagination of our entire nation. pic.twitter.com/r3xVdTKFXf

Saffron led BJP is all set to go ahead in assembly election to dethrone incumbent WEST BENGAL CM Mamta Banerjee.

Netaji rightly believed that there is nothing that constrain India’s growth.

He was always thoughtful towards the poor and put great emphasis on education. #ParakramDivas pic.twitter.com/Pqmb5UvhzL

PM also praised the Assam CM Sarbananda Sonowal government’s handling of the COVID crisis and urged people to get vaccinated when their turn comes. PM Modi said that the center and State Government are committed towards achieving 100 percent electricity and LPG coverage and supplying running water to all the households of the states.

Earlier, in the day, PM Modi distributed 1.06 lakh land pattas or allotment certificates at jarenga pathar in Sivasagar of Assam. He said, BJP is committed to its promise and for the overall development of Assam. Assam had 5.75 lakh landless families, in 2016. The present government has distributed 2.28 lakhs allotment certificates since May 2016. The Government is doing all possible efforts to eradicate poverty, preserve the rights and unique culture of the great state of Assam.

760 goals, Cristiano becomes the Top-goalscorer of all time!