‘Oxygen Express’ will run for Covid patients from today 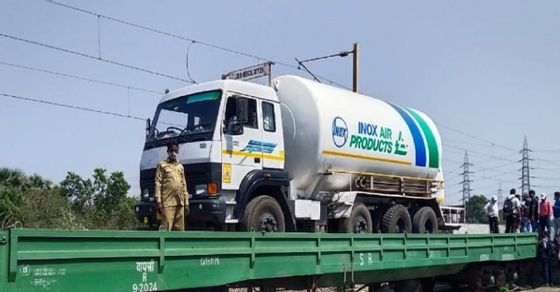 The second wave of the Coronavirus has become a problem in the country. Cases of infection are creating new records every day and along with this, there are reports of lack of oxygen in many states of the country. Meanwhile, Indian Railways has planned to run the Oxygen Express to carry liquid medical oxygen and oxygen cylinders. The first ‘Oxygen Express’ of the railway will start by Monday evening.

Oxygen Express will be given Green Corridor

A special green corridor will be provided for this ‘Oxygen Express’. According to information provided by Central Railway officials, it is a roll-on-rail-off (RoRo) train, on which trucks or tankers are transported. Officials said the empty tankers would operate from Kalamboli and Boisar stations in and around Mumbai on Monday to fill liquid medical oxygen from Visakhapatnam, Jamshedpur, Rourkela and Bokaro. To start the train, tankers are currently being placed on freight flat wagons. After the train arrives, these tankers will be sent by road to various places in Maharashtra.

32 tankers can be placed on the flat wagons of the train. The governments of Madhya Pradesh and Maharashtra had earlier asked the railways whether liquid medical oxygen tankers could be transported from one place to another through its rail network. At the request of the two-state governments, the Railways immediately started considering technical aspects for the movement of liquid medical oxygen. Oxygen Express will also run from Boisar Railway Yard in the Palghar district of Maharashtra. A senior Central Railway official said- “Empty tankers are currently being loaded at the Kalamboli railway yard. ”

An official said that wherever there is demand under the Oxygen Express campaign, we will be able to send oxygen to the place. On April 17, a meeting of railway board officials, state transport commissioners and representatives of the industry was held on issues related to the transportation of liquid medical oxygen. The Railway Ministry said instructions have been issued to the Zonal Railway Centers to ensure readiness to acquire and load the tankers and send them back. The ramps have been prepared at Visakhapatnam, Angul and Bhilai. The ramp already present in Kalamboli is being strengthened. The Ministry said the Kalamboli ramp will be ready by April 19. The ramps will be ready before the tankers arrive at other locations as well.

Lockdown in Delhi for six days from tonight

Rajasthan Lockdown: 15 days lockdown in Rajasthan from today, know what is open – what is closed