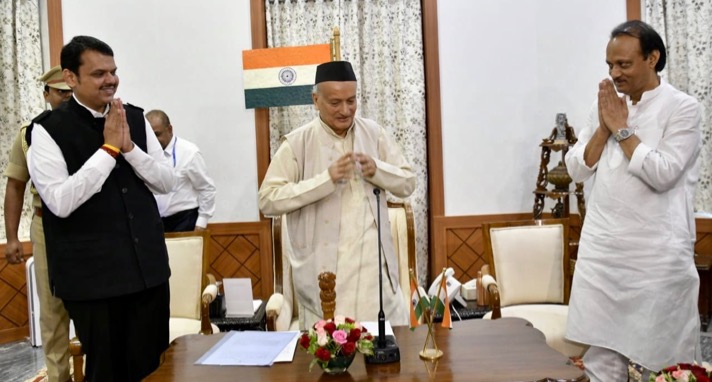 The move came as a surprise as Sharad Pawar on late Friday evening announced the party’s support for Uddhav Thackeray to be CM of Maharashtra with 12,14 and 16 cabinet berths for Congress, NCP and Shiv Sena respectively, as per sources.

Saturday morning, followed by a series of secret meetings and backhand talks by BJP and NCP, resulted into early morning oath taking ceremony, which Sharad Pawar later disapproved. NCP chief Sharad Pawar clarified that the decision of going with the BJP to form the government in Maharashtra is of his nephew Ajit Pawar, and not that of NCP.

The oath-taking ceremony came as a news flash on TV channels broadcasting live from Raj Bhavan with only Asia News International or ANI invited in for the ceremony. PM Narendra Modi’s tweet congratulating Devendra Fadnavis and Ajit Pawar confirmed the reports of possible BJP-NCP government formation. President’s rule was revoked at 5.47 am to facilitate the sudden oath ceremony.

Congratulations to @Dev_Fadnavis Ji and @AjitPawarSpeaks Ji on taking oath as the CM and Deputy CM of Maharashtra respectively. I am confident they will work diligently for the bright future of Maharashtra.

The developments was followed by a personal WhatsApp status update from Sharad Pawar’s daughter Supriya Sule writing,”Party and family split”.

Sena-NCP while addressing media jointly, which saw absence of Congress leaders in it, called the sudden developments in state a foulplay and an unethical coup from NCP’s Ajit Pawar who had allegedly misused the support letters from all 54 MLA’s of the party. Sena’s Sanjay Raut alleged “kidnapping” of 8 NCP MLA’s by BJP. Pawar also warned rebel MLA’s of “anti-defection” law which would lead to suspension from assembly.

Sanjay Raut, Shiv Sena: Of the 8 MLAs who had gone with Ajit Pawar, 5 of them have come back. They were lied to, put in a car, and sort of kidnapped. Agar himmat hai to vidhaan sabha mein majority saabit kar ke dikhaye. pic.twitter.com/hDOKRad9kL

Several questions from opposition and media raised questions about the legal proceedings of the overnight developments from Governor canceling Delhi meeting, President signing the order to remove President’s rule without cabinet discussion and arrival and oath of Ajit Pawar without verification of support letters of NCP.

Several parties have shifted their MLA’s out of the state fearing poaching as the deadline towards assembly floor test approaches.

The Assembly elections in India’s second largest electoral state concluded on 21st October with results out on 24th October no formation had taken place until today.