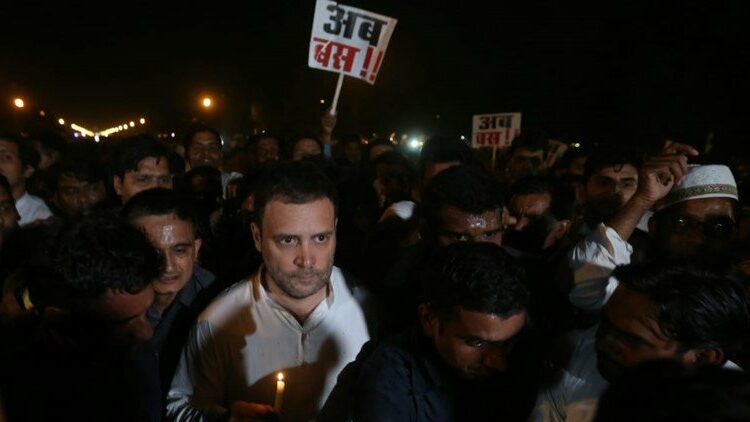 Rahul Gandhi raised his voice against the Government through a peaceful candlelight vigil for going easy on the culprits involved in Kathua & Unnao Rape Cases. The Congress Chief, with several Congress leaders and workers, marched to India Gate in New Delhi last midnight.

An 8-year-old little girl got brutally gang-raped and murdered in Kathua, while in Unnao, the father of an 18-year old rape victim got beaten to death inside the jail by the brother of the accused BJP legislator. Both the cases caused widespread outrage across the entire country questioning the government’s ability to protect the daughters of India.

“This is not a political issue but a national issue. We are seeking justice”, Rahul disclosed the purpose of his candlelight vigil to the reporters. He expressed his disgust over the government’s laid back attitude on these sensitive cases. He demanded justice for the victims by severely punishing the culprits who had committed such heinous crime.

Late in the evening yesterday, Rahul Gandhi declared his decision to march to India Gate online through a tweet: “Like millions of Indians my heart hurts tonight. India simply cannot continue to treat its women the way it does. Join me in a silent, peaceful, candlelight vigil at India Gate at midnight tonight to protest this violence and demand justice.”

In UP’s Unnao rape case, the accused BJP MLA Kuldeep Senger is not arrested yet and is being interrogated by the CBI. In Kathua case, two J&K BJP ministers openly rallied defending the accused. The government is being criticized heavily by the opposition parties and the general public for failing to take strict legal action against the culprits.

The Congress President got accompanied in the protest by his mother Sonia Gandhi, former Congress President, his sister Priyanka Gandhi Vadra, his party cadre, besides several people to seek justice for the victims in a silent and peaceful manner in the march procession to India Gate.