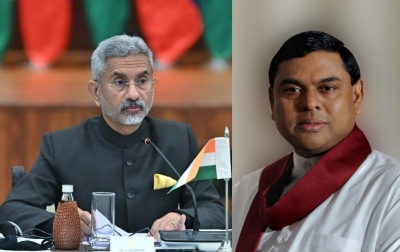 New Delhi, Jan 15 (IANS) To resolve any bitterness between two, it’s always advised that the festivals are the best time, and it seems that the ministry of external affairs took this very seriously, adding a pinch of ‘cultural diplomacy’ into it.

External Affairs Minister S. Jaishankar held a virtual meeting with the Finance Minister of Sri Lanka, Basil Rajapaksa on the festive day of ‘Pongal’, an auspicious day for the Tamil community, which also has a strong presence in Sri Lanka.

Diplomatically, India-Sri Lanka bilateral relations do had some rough patches in the recent past when the Sri Lankan government allowed China to develop its port city — Hambantota, few miles away from the Indian maritime borders, and may have an adverse impact on Indian influence in the Indian Ocean region.

Through the Hambantota port, China was trying to have a strong foothold in said region, which directly influences two-third of global maritime trade, and it’s the Hambantota from where these all started, Sri Lanka badly stuck into chineses debt trap, roughly amounting to over $3 billion. It has reported that debt ridden Sri Lanka seeks Chinese help again to settle its foreign debts.

On ‘Pongal’, both Ministers positively noted the extension of $400 million to Sri Lanka under the SAARC currency swap arrangement and deferral of A.C.U. settlement of $515.2 million by two months, which would assist Sri Lanka.

Rajapaksa recalled India’s long standing cooperation with Sri Lanka and deeply appreciated the gestures of support. He welcomed Indian investments in Sri Lanka in a number of important spheres including ports, infrastructure, energy, renewable energy, power and manufacturing and assured that a conducive environment will be provided to encourage such investments.

In this context, both Ministers noted that the recent steps taken by the government of Sri Lanka for jointly modernising Trincomalee Oil Tank Farms will boost confidence of investors, apart from enhancing Sri Lanka’s energy security.

Jaishankar conveyed that India has always stood with Sri Lanka, and will continue to support Sri Lanka in all possible ways for overcoming the economic and other challenges posed by Covid-19 pandemic.

As close friends and maritime neighbours, both India and Sri Lanka stand to gain from closer economic interlinkages.

The EAM brought up the issue of Indian fishermen detained in Sri Lanka. He urged the government of Sri Lanka to ensure early release of the detained fishermen on humanitarian considerations.

Aggregators, delivery services required to ensure 10% and 5% EVs in Delhi