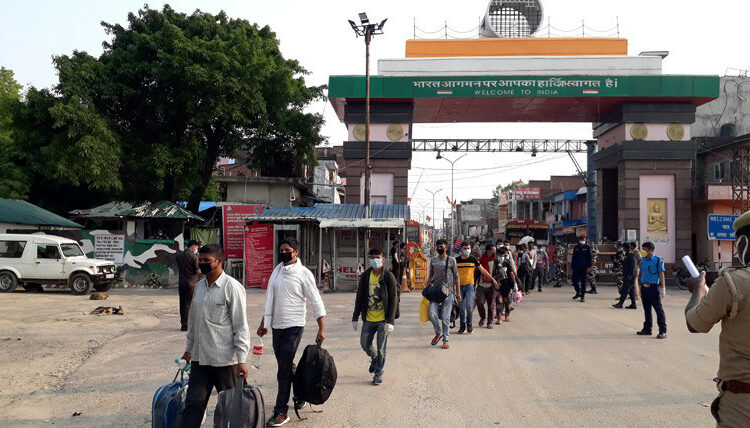 The Indo-Nepal border has been opened on Sunday from 22 March with some conditions. After the permission of Nepal’s Ministry of Home Affairs, foot traffic with conditions has been allowed on 20 other borders including Maheshpur, Triveni in Nawalparasi district on Sunday. Earlier, 10 borders were opened by the Government of Nepal. So far, traffic has been allowed to travel to 30 entry-exit points in Nepal adjoining India.

On Sunday, people were after the Maheshpur border located in Nawalparasi district of Nepal opened. APF (Arm Police Force) personnel posted on the border removed the barrier on the Maheshpur border in Nepal. As soon as the border was opened, people of Nepalese origin wanted to enter India via car and other private means through the defunct border. But the SSB jawans on the Thuthibari border stopped those coming with four wheels. The SSB jawans returned them saying that only patients, students, administrative officers and job people are allowed entry through the Thuthibari border.

Only allowed to walk

No one else is allowed to enter the border with a four-wheeler. Meanwhile, Deepak Paudel, head of the peace, security and crime control branch of the Nepal government, issued a letter stating that 30 entry-exit points have been opened so far.

The situation on Sunday was normal in Sonauli, the most important border of India-Nepal. The personnel of APF (Arm Police Force) and SSB (Sashastra Seema Bal) deployed on the border have allowed people to travel on foot along the border and with an identity card. Freight vehicles have already been allowed to travel through the Sonauli border.

Borders opened by Nepal so far

There has been an order from Nepal to open 20 borders. Under special circumstances, only students, people going for job, patients etc. are allowed to enter. The normal movement will be restored when the orders are issued.

Which Game to Play FAU-G or Call of Duty