India has sent vaccines to 20 countries in the world, sent more than 20 million doses to overcome Covid-19 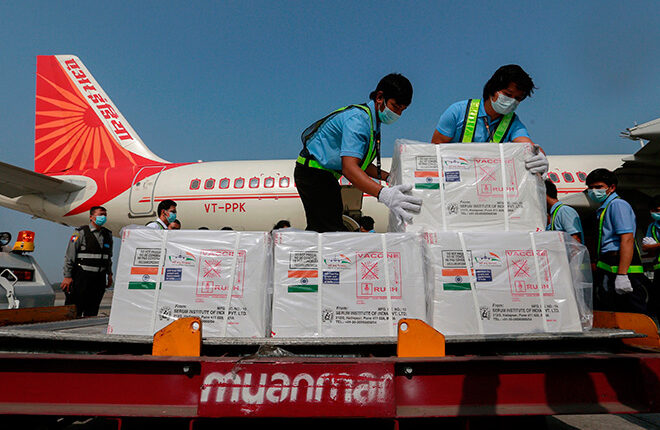 India has emerged as an angel for the world that has been battling the Covid-19 epidemic for more than a year. India has not only succeeded in overcoming this epidemic but it is playing an effective role in bringing the world out of it. India is playing this role in two ways. The first means is to send India’s vaccine to other countries and the second means is to contribute meaningfully to the World Health Organization’s Covax scheme. India has so far provided nearly 230 million doses of vaccine to 20 countries worldwide. In the coming years, India will provide more vaccine supplements to Africa and Latin American countries. The world is known as India’s Vaccine Diplomacy.

Pakistan not a part of India’s vaccine diplomacy

However, in the case of India’s vaccine diplomacy, it includes all the neighbouring countries of India except Pakistan. Pakistan has not been included because of its actions. Also, there has been no official initiative from Pakistan to acquire the Indian vaccine. Apart from this, India has so far sent its vaccine to Nepal, Sri Lanka, Myanmar, Bangladesh, Philippines, Indonesia, Brazil. The President of Brazil even made a memorable tweet after getting the vaccine which showed Lord Hanuman fetching herbs. It was thanked for sending vaccine to India. Let us tell you that WHO has announced to send Covax to 145 countries. Most of these countries are economically poor and who cannot afford the vaccine. These include Pakistan.

India will continue to help even further

Significantly, on 21 January, India took the initiative to carry out the vaccine of Corona epidemic to other countries under vaccine friendship. These included countries that were small and poor, such as the Dominic Republic. India provided this help free of cost to such countries. It has been said very clearly by the Ministry of External Affairs of India that India will continue to help the whole world in this regard even in the coming times. According to information received by the Ministry of External Affairs of India, so far, more than 60 lakh (6.47 million) of the total doses of vaccine to other countries have been given as help while more than 10 million (16.5 million) doses are commercially available.

India gave the highest priority to neighbours in vaccine diplomacy and provided them with this vaccine. The Covidshield vaccine produced by the Serum Institute has reached millions of people abroad by now. At the same time, when talking about Chinese company Sinopharm, Dragon has provided it only to Pakistan and Nepal. Pakistan had to send its plane there to bring this vaccine because China refused to send the vaccine from its plane. Indian Foreign Ministry Spokesperson Anurag Shrivastava has told journalists that India will provide more doses of vaccine to Africa, Latin America, CARICOM, Pacific Iceland in the coming days in a phased manner.

Vaccine supplements sent to these countries

According to the Indian Ministry of External Affairs, so far Bangladesh has 20 lakh, Myanmar 10.7 lakh, Nepal 10 lakh, Bhutan one and a half lakh, Mauritius one lakh, Seychelles 50 thousand, Sri Lanka 5 lakh, Bahrain 1 lakh, Oman A dose of 1 lakh, 5 lakh has been provided to Afghanistan, 1 lakh to Barbados and 70 thousand vaccines to the Dominican Republic. Commercially, about 20 lakh to Brazil, 60 lakh to Morocco, 50 lakh to Bangladesh, 20 lakh to Myanmar, 50 thousand to Egypt, 50 thousand to Algeria, one million to South Africa, 2 lakh to Kuwait and so on to UAE. Doses have been provided.

Help was sought from India

The countries to which India has provided Corona Vaccine supplements were either part of India’s priority or they had appealed to India for this. Recently, Canada has also sought Corona vaccine supplements from India. However, the Ministry of External Affairs has not yet clarified whether these vaccines have been sent there or not. The Foreign Ministry Spokesperson says that a decision will be taken in view of the availability of vaccine in the country and the National Vaccine Program.