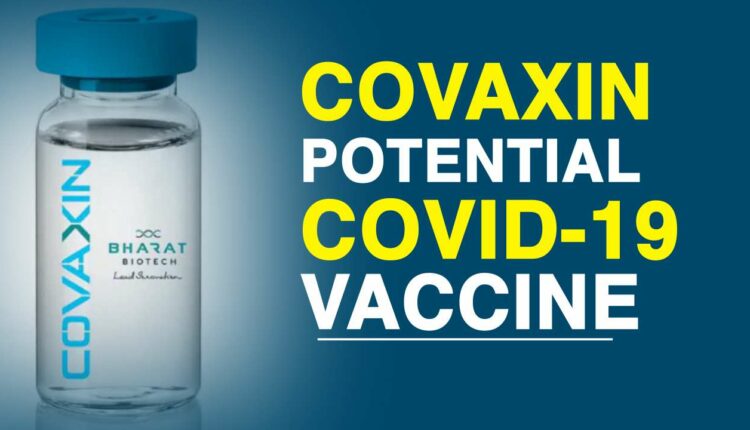 AIIMS director Randeep Guleria said that there is a possibility of infection spreading at the community level in some places in the country. In Phase 1 of the trial, Covaxin is being given to people between the ages of 18 and 55 who do not have any serious illness before.

Human trials of the country’s first indigenous vaccine are starting on Monday in AIIMS Delhi. AIIMS Delhi is one of the 14 institutes in the country, which has been approved by the ICMR for Phase I and II trials. The first phase of the vaccine trial will be at 375 volunteers. Of these, 100 will be covered by AIIMS.

AIIMS director Randeep Guleria told that in phase 1, covaxin is being given to people between the ages of 18 to 55 who do not have any serious illness before. A total of 1125 samples have been taken. Of these, 375 will be studied in Phase 1 and for Phase 2, 750 people aged 12 to 65 will be included.

The Ethics Committee of AIIMS has approved the first human trial of Covaxin. More than 10 thousand people have registered in 10 hours to participate in the trial. At present, only the registration of people of Delhi-NCR will be approved.

Infection at the community level in some places

Dr. Guleria said that there is no evidence of coronavirus spreading at the community level across the country. However, where there are hotspots and in cities where cases have increased rapidly, its infection at the community level cannot be ruled out. In some places, it has reached a peak. This has happened in Delhi and there has been a drop in cases here.

In some states, the cases are increasing rapidly and they too will be on the peak after some time. If we compare not only India but South-East Asia figures in Italy and Spain or with America, then we have a very low death rate compared to there.

Register to join the trial

According to Dr. Sanjay Rai, Professor, AIIMS Delhi, those who want to join the vaccine’s human trial, can register their name on mobile number 07428847499 or if they want to register, mail it to ctaiims.covid19@gmail.com can do. The person on which the corona vaccine will be tested will have its first Kovid test. The trial will be on healthy people. In medical checkup, vaccine dose will be given only after diseases related to blood, BP, kidney, and liver are not found.

5 things related to the vaccine trial

Ever since Bharat Biotech has announced the name of Covaxin, there is only one question on each side – when will this Coronavirus vaccine arrive? Scientists from the Indian Council of Medical Research (ICMR) and the National Institute of Virology, Pune are also working closely with Bharat Biotech to create this vaccine. Regarding vaccine trials, retired ICMR scientist Dr. Raman R. Gangakhedkar says that covaxin has been trialed on animals. Now there will be a human trial.

Understand it in 3 phases

In a conversation with Prasar Bharati, Dr. Gangakhedkar said that there are three levels of trials on humans.

Second stage: It is seen that there is no side effect of the vaccine. Whether there are any side effects within a year or 6 months.

Third stage: During this time it is seen how many people get a new disease after giving the vaccine.

The fourth stage process is not in trial mode. When they start giving vaccines to common people, it is seen that there are no side effects for the next two years. It is called post-marketing surveillance. A final decision is then taken on the vaccine.

How long can it take for the vaccine to reach the common people?

On this question, Dr. Gangakhedkar said that till the time of Kovid, the vaccine trials took 7-10 years. Since the corona epidemic is spreading at a rapid pace, vaccine trials are being done in different ways to reduce the infection. It will take about one and a half to two years to be made in India too. India’s first vaccine, the first phase of its trial will be completed by August 15. It will know whether antibodies are made by this vaccine and whether it is safe or not. After that, there will be a second stage trial. Perhaps the company has thought that if this vaccine works, it will start its production, so that if it succeeds after the whole trial, then it will reach a large population in India soon. If this is not done then there can be damage.

China and American vaccines are also of India’s standard

Dr. Gangakhedkar said that vaccine trials are conducted in different phases. Around 40 to 50 people are tried in Phase One. Phase 2 consists of a trial of 200–250 people. In Phase 3, a large number of people participate. But whatever the results are, based on the calculation, samples are taken. He said that there are only two vaccines that are in the Phase 2 trial. An Oxford-made vaccine is named Kedox. The second is the Chinese vaccine, created by the Cyanovac company. Both of these are of the level of Covaxin produced by Bharat Biotech.