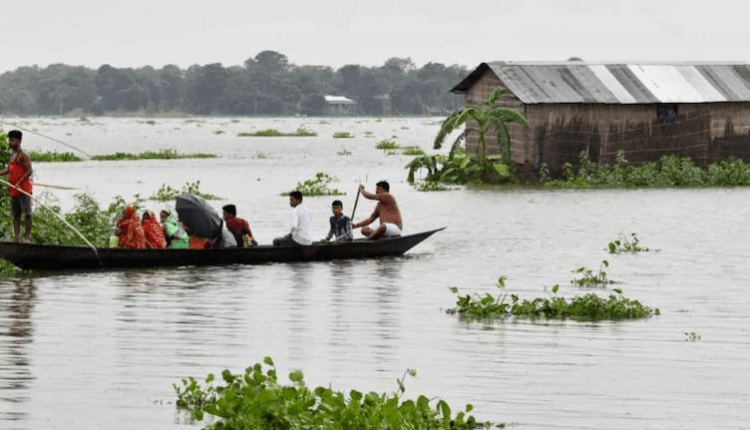 26 out of 33 districts of Assam are in the grip of heavy rains, severe floods, and landslides. So far 105 people have died here. About 27.64 people are affected. There are about 18 thousand people in relief camps.  A family of Rongmola village in Dibrugarh district returned home from the relief camp two days ago. Their house, made of bamboo, tin roof, has almost completely deteriorated due to floods. A family has returned home with his wife and two children but is now worried about employment.

They said, “Kamdhandha (Livelihood) was destroyed after the lockdown. Now the floods destroyed life. He was running the family by running a small grocery shop. Now all the avenues have been closed. The farmland has already gone into floods and landslides. For six days, we were staying in a temporary camp built at Suhagi Devi School. Due to the risk of infection, the floodwaters in the houses returned. There was always a fear that the corona might not spread somewhere in the camp.

Some people built tents and lived in high places

Some flood victims were living in tents with plastic tarpaulin in high places, so that social distancing could be maintained. We have been taking shelter in relief camps during floods every year since 1998, but never felt so scared. ”Chief Minister Sarbananda Sonowal’s native village is Muluk, just two km from the village of Shyamal. Floods have also caused havoc here. Around 100 flood-affected families have taken refuge in the local Bishnu Rabha auditorium here.

No wages due to Corona

Adalat Khan of Debriduwa village in Chhay district says, “I have been in relief camp with children for the last one month. The fields and houses have been submerged in floods. Due to corona, you cannot go to work anywhere. If the government also does not help during such a crisis, then we will die of hunger. The MLAs of the area did not come to take care. In the election, all parties come to ask for votes, because there are 8 thousand votes in Debriduva. ‘

This has been confirmed by Barpeta District Deputy Commissioner Munindra Sharma. They say, “About 739 villages in our district are affected by the floods. About 12 lakh people are vulnerable to floods. A total of 15 people have died. Bhutan has been releasing water continuously for 10 days. If he releases 1000 to 1500 cumecs of water daily, the situation will get worse. ”On the other hand, 96 animals have died in Kaziranga National Park due to floods.

Out of the total 223 camps in the park, 99 camps have been submerged. Six camps have to be evacuated. Here, Assam Chief Secretary Kumar Sanjay Krishna says, “The district administration has asked the officials to make complete arrangements for social distancing in the relief camps. To make relief camps, such places had already been selected, where quarantine centers could be built if needed. This time the challenge of flooding due to corona is bigger than before.