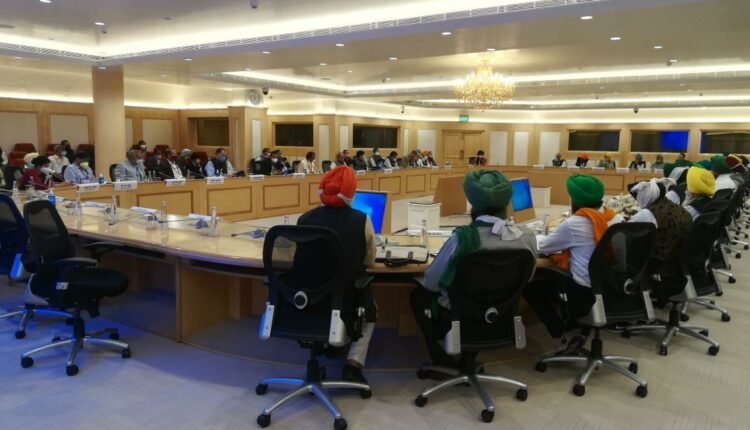 The 10th round of talks between the central government and agitating farmers is going on today regarding new agricultural laws. Agriculture Minister Narendra Singh Tomar and Union Minister Piyush Goyal are holding talks with farmers at Vigyan Bhawan. The talks were earlier scheduled to be held on Tuesday but was postponed. Since 26 November, farmers have been protesting against the three new agricultural laws on the Delhi border. They are adamant on demanding the withdrawal of all three laws. On the other hand, the central government is describing the new laws as beneficial for the farmers and wants to resolve the deadlock through negotiations. There have been nine rounds of talks between the two sides so far, but nothing has been achieved so far.

After coming out after the meeting, the farmer leader said that the government has said that it is ready to suspend the laws for a year and a half. In response, the farmers said that there is no point in suspending the laws and made it clear that we want to repeal the laws.

According to sources, Agriculture Minister Narendra Singh Tomar proposed the formation of a committee, which would consist of members of the government and the farmer. The committee will discuss class wise laws, while the court has stayed farm laws for 2 months. If the need arises and the consultation continues, the government can stay the implementation of the law for a year.

The 10th round of negotiations was inconclusive, with the Central Government proposing a temporary moratorium on agricultural laws, on which the farmer leaders did not agree. The government appealed to end the agitation.

Spokesman Rakesh Tikait of Bhartiya Kisan Union said that the government must enact a law on the minimum support price (MSP) and discard three agricultural laws. Our opposition is against the government and the corporate system.

Protest of farmers on the Singhu border against agricultural laws continues today for the 56th day. The chairman of the Kisan Mazdoor Sangharsh Committee said, ‘Today’s meeting is not expected either. The result will be the same as the first meeting because the government does not want to repeal the laws and make laws on the MSP.

Center positive to reach a solution through dialogue: Narendra Tomar

On January 15, the ninth round of talks took place between the central government and the farmer unions. Union Agriculture Minister Narendra Singh Tomar has said that the unions have been asked to form informal groups among themselves and submit a draft to the government regarding their demands. The Agriculture Minister has said that the government will consider the draft with an ‘open mind’. He said that the government is concerned about the farmers protesting in the event of cold. He stressed that the Center is positive to reach a solution through dialogue. On 12 January, the Supreme Court stayed the implementation of the three agricultural laws of the Center and asked the committee constituted by it to submit its report in two months.

Instructions to report to the committee within two months

The committee has been directed to negotiate with the farmers and submit their recommendations related to agricultural laws within two months of their first meeting. However, the leaders of the farmer unions rejected the committee, saying that their members were already in favor of agricultural laws. The National President of the Bharatiya Kisan Union (MAN), Bhupinder Singh Mann, on Thursday, distanced himself from the four-member committee appointed by the apex court regarding the new agricultural laws.

The committee will hold its first meeting with farmers on 21 January. Panel member Anil Ghanwat gave this information on Tuesday. He said during a press conference that the biggest challenge before the committee is to convince agitating farmers to discuss the matter.