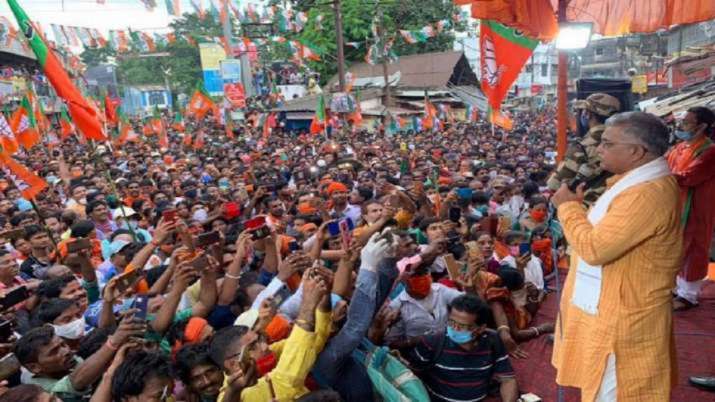 In view of the continuous increase in the Covid-19 cases, the Election Commission has stopped campaigning in West Bengal. Not only this, only 500 people will be allowed in public meetings. It is important to note that the number of cases of Covid in the country has increased continuously in the last 24 hours has crossed the mark of three lakhs. The Election Commission said on Thursday evening, no public rally, foot march, or roadshow will be held during the last two phases of the West Bengal assembly elections. The announcement was made by the Election Commission a few hours after the Calcutta High Court ordered to take appropriate steps due to the growing cases of Covid.

With this, the old orders of the rally and roadshow will be considered canceled. The Election Commission has said that only meetings can be held in which a maximum of 500 people will be able to attend. The court was hearing petitions stating that the election rallies are ‘super spreaders’ in terms of Covid cases. During the hearing, the High Court showed a strict attitude towards the Election Commission. The court believed that despite having authority, the Election Commission is not taking adequate steps in this matter.

Prime Minister Narendra Modi has canceled his visit to Bengal on Friday due to a meeting to review the situation of Covid in the country. He was going to West Bengal to campaign in the assembly elections. After the cancellation of the Bengal tour by the PM, all the senior BJP leaders have also canceled their rallies in West Bengal. Rallies of PM Narendra Modi, Home Minister Amit Shah, BJP President JP Nadda have been canceled. The BJP had earlier said that there would be meetings with a presence of maximum of 500 people.