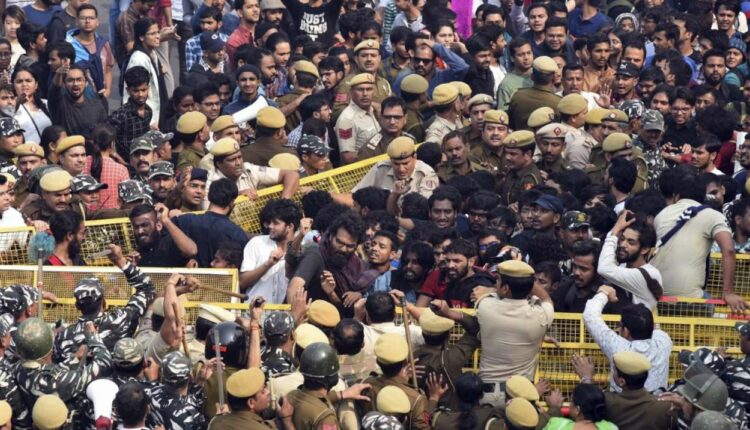 Protest: Thousands of students of Jawaharlal Nehru University (JNU), marched towards Parliament chanting anti-hike slogans and placards on the first day of the Winter Session on Monday, demanding a total rollback of the hostel fee hike.

NEW DELHI: Delhi Metro has closed entry and exit gates at the Udyog Bhawan, Patel Chowk, Lok Kalyan and Central Secretariat stations in the city after hundreds of Jawaharlal Nehru University students clashed with cops after taking to the streets to demand a full rollback of the recent hostel fee hike. In tweets posted on its official Twitter account, the Delhi Metro Rail Corporation (DMRC) said the decision to shut key Yellow Line stations amid the JNU students’ protest was taken after discussions with the police.

The agitated students broke barricades, even as a heavy contingent of police force was deployed outside the campus to monitor the situation. For the past three weeks, students have been protesting inside the administration block of the university against the increase in hostel fee. The union said it will be a march to save public education and appeal to MPs to take up the cause.

While the students were stopped by the Delhi Police from reaching the high-security zone in Central Delhi, they sat at the Safdarjung Tomb on protest, causing closure of roads and metro stations.

“The students are struggling hard to clear the barricades installed by the Delhi police, but they admit that they might not reach parliament because of heavy police and CRPF deployment in the way,” a student was quoted by news agency IANS.
The students have been protesting over the fee hike that was revealed in a recently released draft hostel manual. Last week, hundreds of students clashed with cops on the university’s convocation day. Policemen in riot gear, completely outnumbered by students, were seen jostling with the crowd.

After last week’s protests the fees were rolled back on Wednesday but only partially. Room rents have now been halved for students who are from the below poverty line (BPL) category.

Kalki Koechlin On Her ‘Unexpected Pregnancy’, Her Marriage Plans And Embracing Motherhood