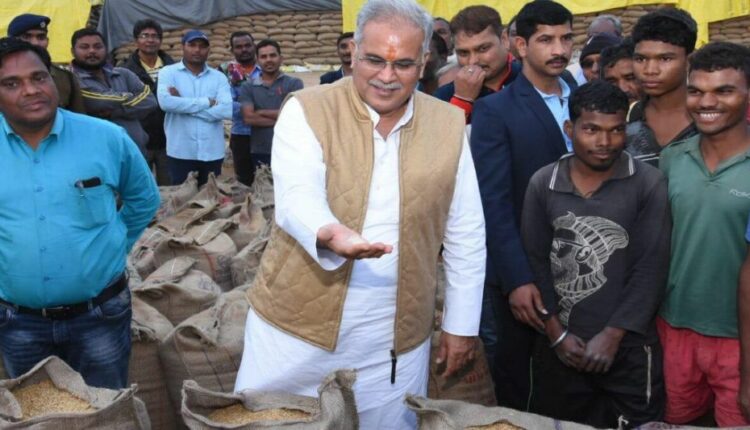 Due to the farmer-friendly policies implemented in Chhattisgarh under the leadership of Chief Minister Bhupesh Baghel and the better system of paddy procurement at the support price, a record 95.38 percent of the total registered farmers sold paddy in the Kharif marketing year 2020-21. The number of farmers selling paddy is the highest this year. This year out of 21,52,475 farmers, 20,53,483 farmers have sold their paddy.

Significantly, despite the adverse circumstances in the state, adequate arrangements were made for the purchase of paddy by the state government. To overcome the shortage of gunny bags, the smooth availability of gunny bags was ensured through several alternative arrangements. Payment to farmers was made continuous. Along with the custom milling, the lifting of paddy in the collection centers is also continuing. Paddy procurement has been done peacefully and smoothly in the state.

Under the leadership of Chief Minister Bhupesh Baghel, a new record has been created in the state of Chhattisgarh. In the last two years, the area of ​​farming has increased significantly in the number of farmers. Due to the farmer-friendly policies of the state government, the area of ​​registration of paddy cultivation has reached more than 27 lakh hectares and the number of registered farmers has reached 21,52,000.

It is a sign of a happy future for the agriculture-farming being prosperous in the agrarian Chhattisgarh state. Chief Minister Bhupesh Baghel took the historic decision to waiver of taxes from farmers. Due to this, farmers got support in the state. People started returning to agriculture. Under the Rajiv Gandhi Kisan Nyay Yojana, the farmers’ enthusiasm doubled after getting 10 thousand rupees per acre of agricultural input assistance. Under this scheme, farmers of the state are being given direct assistance of Rs. 5750 crore. The amount of three installments has also been transferred to the accounts of the farmers and the fourth installment amount will be transferred by March.

Prepaid plans under 250 rupees, which is more economical in Jio-Airtel-Vodafone?