Another meeting will be held on January 19, the 10th round of talks between the government and the farmers 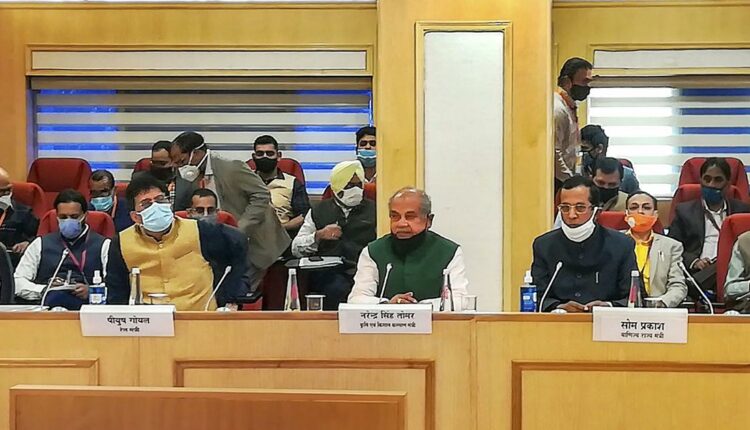 Farmer’s protest against agricultural laws continued today for the 51st consecutive day. Meanwhile, to end the deadlock, a meeting was held between the government and farmer organizations in New Delhi. This meeting of the 9th round was also inconclusive. Now there will be a discussion on 19 January.

During the meeting, Agriculture Minister Narendra Singh Tomar appealed to the farmer’s leaders to bring flexibility in their stance. Explain that the protesting farmers are demanding the withdrawal of three new agricultural laws from the central government. At the same time, the government is talking about amending the law.

After the meeting, Union Agriculture Minister Narendra Singh Tomar said that the 9th round of talks with the farmers union took place. All three laws were discussed. The Essential Commodities Act was discussed in detail. Attempts were made to address their doubts. The union and the government decided that there would be discussed again on January 19 at noon.

Tomar said, “The government suggested to form an informal group of farmer unions to finalize concrete proposals so that these proposals can be discussed informal talks”.

He further said that we are fully committed to the orders of the Supreme Court and welcome his decision. The government, when invited, will present its case before a committee appointed by the court.

Tomar said that the farmer’s unions want to continue the dialogue with the government and we have no problem with this. The committee appointed by the Supreme Court will also work for the welfare of farmers.

Before the lunch break during the meeting, Food Minister Piyush Goyal responded to the farmers’ questions on the changes made in the Essential Commodities Act. Some farmer leaders did not want to hear Piyush Goyal’s answer as he said that there can be no dialogue except withdrawal of the law. However, some other farmers were in favour of listening to the talks of the government.

On January 12, the Supreme Court had stayed the implementation of three new agricultural laws. Also, the court constituted a four-member committee.

In the sixth round of talks between the farmers’ organizations and the Center on December 30, two demands were agreed to exclude stubble burning and to continue subsidy on electricity.

ITR can still be filed after the deadline is over, know how many penalties will be charged?