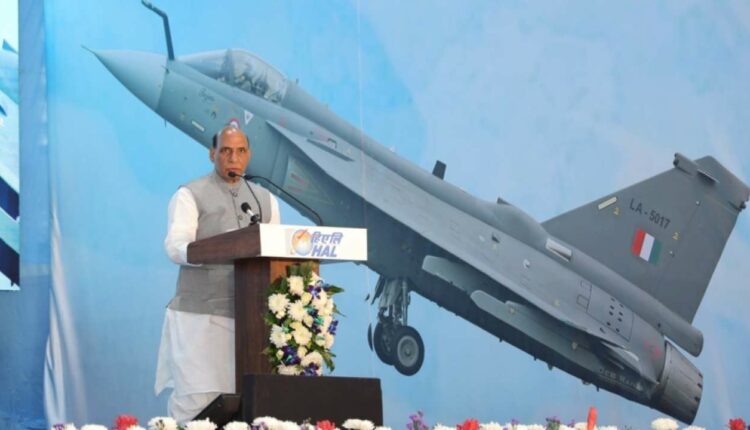 Defence Minister Rajnath Singh has arrived in Bengaluru, the capital of Karnataka today. It was here that he took part in the Startup Manthan organized under Aero India 2021. Addressing the program, the Defense Minister said that our government is fully aware that there is an urgent need to bring startups in the defence manufacturing sector. He said that keeping this goal in mind, several important steps have been taken in partnership with private industry.

Rajnath Singh said that a large number of initiatives have been taken to be a part of India’s defence industrial initiative to invite the partnership of major companies around the world. Keeping this goal in mind, FDI was raised from 49 per cent to 74 per cent in August 2020.

Rajnath while discussing the importance of India’s self-reliance in defence manufacturing said “Self-reliance in the manufacture of defence equipment is essential to maintain India’s strategic autonomy. He said that the Innovation for Defence Excellence (iDEX) initiative stands out as one of the most effective and well-executed defence Start-up ecosystems created in our country. At the same time, he said that at least 1200 startups and innovators have participated in the Defense India Startup Challenge DISC. Of these, at least 60 startups are under DISC Challenges 30 is in technical fields.

During his address, Defense Minister Rajnath Singh said that the Aero Indio show organized this time was attended by traders from at least 45 MSME sector, who have already received orders of at least 203 crores.

Along with this, he said that 384 startups have invested Rs 4500 crore through the fund scheme. He said that our economy is going to be driven by startups soon.

Addressing the program, Rajnath Singh said that the Indian startup is based on three major pillars. The first is a simplification, the second is hand holding funding, and the third is industry-academy incentive participation.

Today is the last day of the Aero India show held in Bengaluru from 3 February. This time the show was allowed to be held for three days. Actually, due to Corona, the showtime has been reduced this year.

RBI Monetary Policy Committee (MPC) Decided To Keep The Policy Rate Under The LAF Unchanged At 4.0%, Highlights Are Here