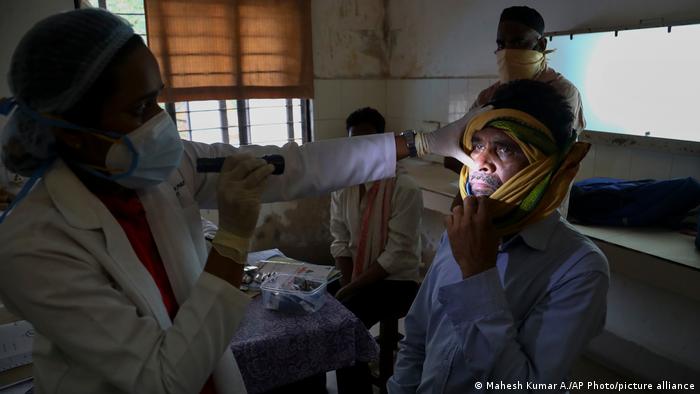 WHAT IS BLACK FUNGUS?

Mucormycosis or black fungus is a rare, meddling, opportunistic fungal infection caused by group of molds called mucormycetes which are generally present in an environment like soil and decay particles usually affecting immunocompromised patients.

It is non-contagious but it can be severe and sometimes fatal with a mortality rate of 46-96%.

Dr. Eric Cioe-Peña , Northwell’s Health director of Global Health said “its, an environmental mold, which once infects you has very morbid and a high mortality. because it’s so rare, the exact mortality is not clear. But researcher estimate overall 54% deaths of people with black fungus.

As it can infect different parts of the human body including the sinus, brain, lungs, digestive tract, skin and eye.

Depending on the site of invasion and infection, it manifest as follow:

If the fungi infect the sinus and brain (rhino cerebral mucormycosis), the patient may experience fever, facial swelling on one side, headache, nasal or sinus congestion.

cutaneous mucormycosis : on the skin, it may appear as blisters or ulcers and sometimes inflammation which progressively turns black.

pulmonary mucormycosis:If the lung is infected, then cough, chest pain and shortness of breath are significant symptoms. Hemoptysis (cough with blood) may occur in case of necrosis.

orbital mucormycosis: patients especially with diabetic ketoacidosis have reported this and shows the symptoms of pain in the eye, double vision, swelling around the eye, blindness and difficulty in closing or opening the eye.

Disseminative mucormycosis is seen in patients who have additional medical problems and is hard to separate the symptoms.

National Organization for Rare Disorders explains that Mucormycosis is not contagious and do not spread from one person to another, but present in the environment. So, the transmission is done by either inhalation of mold spores via dust or coming in close contact with soil, rotting products such as bread or fruits.

KNOW WHO ARE AT THE RISK:

According to the study conducted by the European Society of Microbiology and Infectious Diseases, It has been shown that mucormycosis is more prominent in a patient with the following conditions.

Mucormycosis is curable if detected earlier,

According to Centres for Disease Control and Prevention (CDC), it can be treated with Antifungal agents like Amphotericin B, Isavuconazole and Posaconazole administered either by oral route or parenteral (via vein)

In severe cases, surgery is recommended to remove dead or infected tissues and sometimes even part of the nose and eyes which can cause distortion of face.

TIPS FOR PREVENTION OF BLACK FUNGUS:

Though it can affect anyone, so general preventive measures need to be taken are:

According to the researcher, mucormycosis is detected frequently in patients recovering with covid19 and probably thought of due to weak immunity caused by corona virus and high use of chemotherapy and steroid .

A Study in Tehran, 2014 claimed that hospital air might carry many opportunistic and pathogenic fungi like penicillium, aspergillus, candidiasis and rhizopus leading to hospital acquired infections.

As patient with covid19 or HIV/AIDS have low immunity they are more prone to be infected.

India has been witnessing the spike in cases of mucormycosis also called black fungus meanwhile battling the covid19 pandemic. It is commonly evidenced to pose a threat to immunocompromised patients suffering from Corona virus, HIV/AIDS etc. Increase in case of mucormycosis has put a call on shortage of Amphotericin B supply making a problem to tackle. Union health ministry has asked states and union territories to make mucormycosis a notifiable disease under the Epidemic Disease Act, 1897. Though it can be prevented by taking few measures and enhancing our immunity.