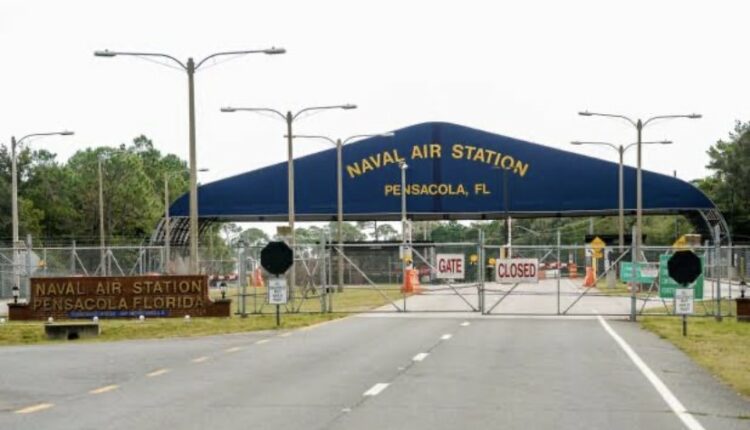 A gunman was stopped by two sheriff’s deputies on Friday morning at Naval Air Station in Pensacola. The reports reflect that the suspect was among the four people killed.

The names of the suspect or the victims have not yet been released.

NAS Pensacola, an air station which is also the primary training base for all U.S. Navy, Marine Corps and Coast Guard officers pursuing designation as Naval Aviators and Naval Flight Officers, located in Florida’s western Panhandle gives employment to over 16,000 military and 7,400 civilian personnel.

Two days prior to this shooting, a US Navy sailor shot three dead before killing himself as well at Pearl Harbor.

Four individuals including the shooter have been confirmed dead while seven individuals sustained injuries.

Authorities have speculated that the approximate time of the shooting was around 6:30 AM in central time while it was only reported a half hour later.

The suspect has not been identified yet and cannot be declared as a military personnel just as yet. However, the suspect died an hour and a half after the shooting began, according to the a Escambia County Sheriff’s Office.

Two floors of a classroom building near Radford Road on the base was where the shooting went down and the base was then put into lockdown. Not only this building but also the St John’s Catholic School and the Corry Starion naval training installation, located outside the base have been put under lockdown due to the aforementioned event. Military personnel are staying in place and taking shelter where they are until the lockdowns are lifted.

“This is a tragic day for the city of Pensacola,” said Pensacola Mayor Grover Robinson.  “We’re a military town. Our hearts and prayers are connected to those that serve us every day. And certainly the expectation that this would happen to us here, at home, was unexpected.”

Lawmakers from around the country have taken to Twitter to express their thoughts and concerns. President Trump has also followed the Twitter trend and put forth his thoughts on the social media platform. The country still lies in shock over the gravity of the escalating tensions and situations occurring all around.

We are actively monitoring the shooting that occurred this morning at Naval Air Station Pensacola. We are receiving updates from @fdlepio Commissioner Swearingen and offering our full support to law enforcement.