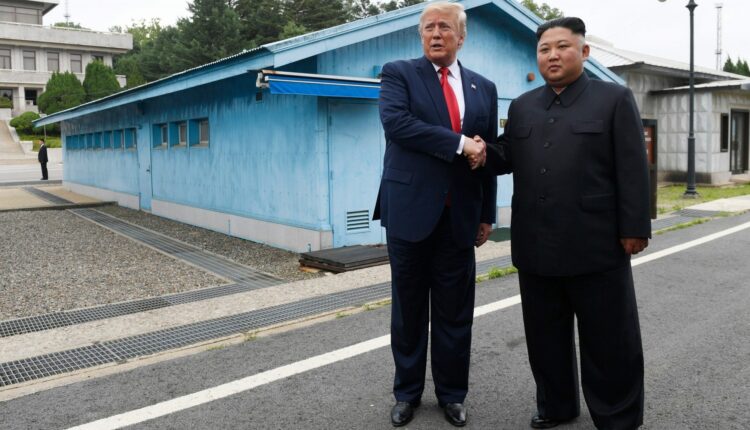 South Korea : US president Donald Trump met Chairman Kim Jong Un crossing over the demarcation line between North and South Korea.
There was a historic handshake between the both at the demilitarized zone being the first ever sitting president to set foot over to what is called the most isolated nation in the world, being at brinks of war for multiple times with US.
Mr Kim said he had never expected to meet the president at this place.

Pres. Trump became the first U.S. president to step into North Korea as he strode by himself across the demilitarized zone and shook hands with North Korean leader Kim Jong Un. https://t.co/IwiGbk2gav pic.twitter.com/UeAZ3b8IJC

Trump, in the backdrop of G20 Summit, visited North Korea accompanied with his daughter Ivanka Trump and Secretary Mike Pompeo.

Both leaders are seating for a press conference at De-militarized Zone, which was highly unexpected.

Chairman Kim says it is “very significant” that they can meet – “This means we can feel at ease and meet each other with positive answers. I believe this will have a positive influence on all of our discussions in the future”.

The summit, Mr Trump says, was “long planned” and that Mr Kim had invited him over.

The invitation to meet Kim however was put out by an impromptu tweet by President Trump.
Trump has repeatedly said the press coverage of his relationship with North Korea’s Kim of being too negative, lashing out at media.
“If you didn’t show up the press was going to make me look very bad”, Trump said on Twitter.
https://twitter.com/realDonaldTrump/status/1144740178948493314?s=19

He says he was “proud to step over that line” in to North Korea.

“I enjoy being with you,” he tells Mr Kim towards the end of press conference.

Talking to press President Trump also said that he would invite Kim to White House.

"I would invite him right now to the White House," US President Trump says after stepping into North Korea with Kim Jong Un https://t.co/BdopR30sZL pic.twitter.com/3X6LZtBhXM