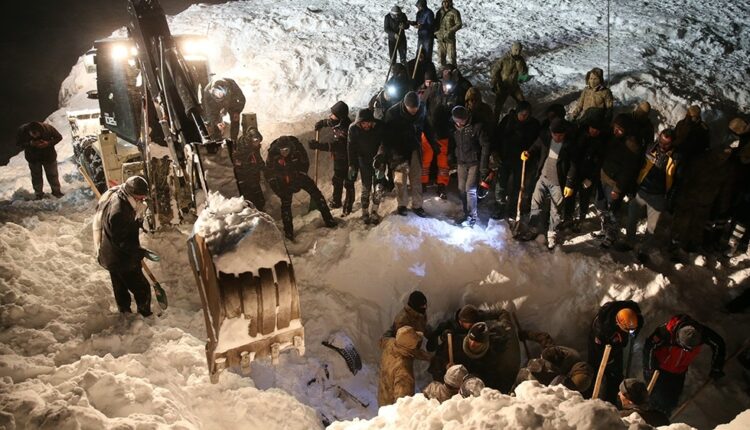 A major rescue operation is going on in Turkey after two avalanches hit the same location in the eastern part of the country that has trapped the previous rescue workers who were dispatched to deal with the initial avalanche.

The first avalanche hit a minibus and a snowplough and knocked it off the mountain near Van city. rescue workers were sent to recover the two missing persons from this avalanche. When they arrived a second avalanche hit the scene and killed 33 people and injured 53 others. Authorities have now declared that there could be a third avalanche in the region. There has been dramatic footage recovered which showed that the rescue team members were trying to dig up the minivan which was submerged under a blanket of thick snow a few moments before the second avalanche hit.

Among those who got buried was Osman Ucar who is the Chief of the Van City Rescue Workers (AFAD) association. He got rescued and now has been taken to the hospital. According to the AFAD statement, a second avalanche hit on the teams that were working to rescue citizens who got submerged in 24 hours after the first avalanche between Bahçesaray and Çatak districts.

To offer assistance in the region, 153 rescue personnel, 28 ambulances and 17 rescue vehicles were sent. According to Süleyman Soylu who is the Turkish Minister of the Interior, only 30 people have been rescued so far. On the other hand, the Minister of Health, Fahrettin Koca said in a statement that the total number of people who have lost their lives might increase along with the total number of injured people.

This disaster occurs just after weeks of a strong earthquake that have hit eastern Turkey a few hours west of Van which has injured 1,000 people and killed 25.