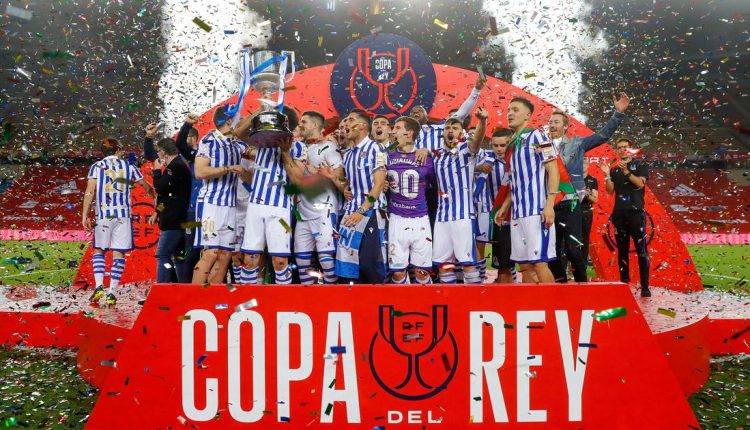 Real Sociedad beat local rival Athletic Bilbao 1-0 in the rescheduled 2020 Copa del Rey final on Saturday to get its hands on a major trophy for the first time since 1987.

According to Sportstar, The match was postponed by a year at both clubs’ request to ensure f ans could attend, meaning Athletic surrendered a potential Europa League berth. But continued coronavirus restrictions in Spain suggested the showpiece in Seville’s La Cartuja stadium took place without any supporters.

Athletic defender Inigo Martinez gave a terrible challenge within the penalty area, tumbling down the Sociedad striker Portu giving away a costly penalty. Mikel Oyarzabal scored the penalty and the only goal of the match in the 63rd minute by tricking keeper Unai Simon into diving the wrong way. Oyarzabal’s goal coming from the penalty spot was one of just two shots on target all night, but it meant everything for Sociedad. In the end, there was liberation, an outburst of joy for la Real.

Real Sociedad had not just waited a year to play this final, ultimately forced to do so without their fans despite doing everything they could to have them there; they had waited 33 (34 years) to win a major trophy, just the fifth in their history.

David Silva lifted his first trophy for Real Sociedad after just one season with the club. His 10-year contract with Manchester City ended last season, leaving him as a free agent for Sociedad to acquire.

Sociedad’s captain Asier Illarramendi who was ruled out of the match due to calf injury, supported his mates from the stacks and, at the end, lifted the Spanish trophy to reunite and celebrate with the club post-match.

For Athletic Club, there will be another chance against Barcelona in the coming two weeks, but that did not make it easier to take.