Saturday's rain-filled clash between the top Spanish rivalries resulted in another victory for the Los Blancos' over Barcelona, pushing them to the top of the league, followed by Atletico Madrid. 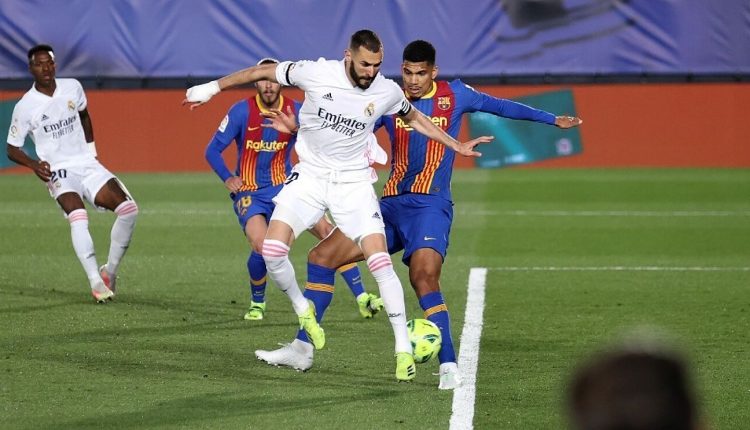 Looking back at El Clasico’s history, Out of all the 246 matches played in-between the clubs, Real has won 98 with 410 goals and Barca 96 with 400 goals; the rest remaining 52 resulted in draws.

Real Madrid climbed to the top of the La Liga table after Karim Benzema and Toni Kroos’s contributions helped them claim a thrilling 2-1 victory over Barcelona in a nail-biter Clasico at the Alfredo di Stefano Stadium.

The opener came as early as in the 13th minute of the match. A scintillating run from Fede Valverde who then gives it to Lucas Vazquez. After a low cross going through the legs of Barca’s defence finds Benzema, with a slick backheel, he lay it past Ter Stegen.

Toni Kroos doubled the lead with a ‘pinball’ free kick from 27 yards out. The shot ricocheted off the back of the American, Sergino Dest, as he leaped in the air as part of the wall 10 yards in front of goal onto Jordi Alba, who, unable to head it off, puts in into the goal.

Fifteen minutes into the second half, Barcelona finds some hope with a comeback by Oscar Mingueza’s run into the penalty, out of nowhere. Alba’s cross finds the 21-year-old defender who rams pulling one back for the team.

The finale left Koeman, and the Cules enraged and confused as they say they were robbed of a penalty. In the closing minutes, Martin Braithwaite went down in the penalty area after being grabbed by Ferland Mendy. Neither the referee Gil Manzano did not react nor did the VAR intervene to reverse the on-pitch decision, thus continuing the play.

Casemiro, seconds after being carded for a foul challenge on Leo Messi, was shown a second yellow for tackling Mingueza in an excellent free-kick territory for Barcelona.

The match concluded with a dramatic attempt on goal as Barcelona came significantly close to equalizing. With the whole team, including Ter Stegen, upfront to reap the final chance, The youngster Ilaix Moriba shot a powerful drive hitting the crossbar. It was not meant to be for Barca, as they went home empty-handed.

Madrid has now beaten Barcelona three times in a row for the first time since 1978. After this season the Argentine would be free of his contract and become a free agent. Will this be Messi’s last El Clasico at Barcelona?

After Wining India’s first Olympic singles match in 25 years, Nagal Knocked out by…