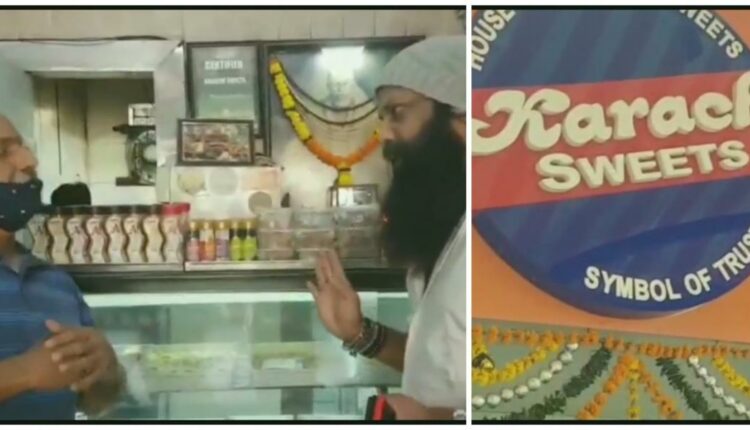 Recently a Shiv Sena leader Nitin Nandgaonkar uploaded a YouTube video, where he approached the shop owner of a sweets shop named ‘Karachi Sweets’ to remove the name Karachi from the name.

He allegedly threatened the shop owner to remove the owner stating ‘We hate the word Karachi… it’s the place of terrorists in Pakistan’, and asked him to change the name.

The shop owner concealed the word ‘Karachi’ on the signboard with news paper. He was asked to change the name of the shop from ‘Karachi Sweets’ to ‘Marathi Sweets’.

Many people on Social Media supported this action saying it was to prevent anti-nationalism, while others called it a way of promoting Anti-Pakistan propaganda.

Such cases of politicians urging the general public of not promoting and associating Pakistan has been seen in various instances.

One specific case that comes to mind is when a 19 year old girl was charged for sedition for saying ‘Pakistan zindabad’ in an Anti- CAA Owaisi rally.

The 19 year old girl went to stage and said ‘Hindustan Zindabad, Pakistan Zindabad’ and repeated both the statements repeatedly, when finally she was removed from the stage by police officers.

The girl received was charged for sedition, she received a lot of public support as well as criticism for the slogan.

#Opinion (This part onwards is solely the writer’s opinions and not facts.)

When the Karachi shop owner was called out for having the name of a Pakistan’s city in its signboard and asked to change it, it promotes hatred towards Pakistan in the younger generations.

The only way India as Pakistan can solve their dispute is by peaceful resolution and other mechanisms that lead to a solution for infinite border disputes, army face-offs and the decades long Kashmir dispute.

Raising anti-Pakistan propaganda can only create more hatred and increase the conflicts.

We also need to understand the difference between being Pro-Pakistan and Anti-India. We often see an individual supporting Pakistan to be an anti national or seditious, but the two are not related.

Being anti-national means going against Indian values, ideas (equality, democracy, etc) and the constitution, nothing more and nothing less!