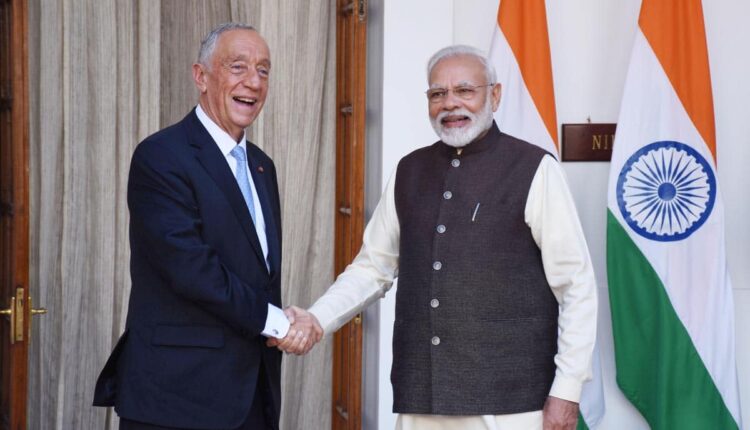 India and Portugal on Friday exchanged 14 agreements and understandings in a number of key areas, including maritime, intellectual property rights, aerospace and scientific research, as President Ram Nath Kovind hosted his Portuguese counterpart.
Kovind received Marcelo Rebelo de Sousa at the Rashtrapati Bhavan on his first state visit to India.

Kovind said “Portugal-India relations are very special and the two countries enjoy 500 years of shared history”. “The two countries are closely tied together through Goa and Mumbai, through our culture, language and kinship,” he said.

Kovind thanked Portugal for extending its support for the commemoration of Mahatma Gandhi’s 150th birth anniversary.

The president said the “India-Portugal bilateral agenda has expanded several folds. The two countries are collaborating in science and technology, defence, education, innovation and start-up, water and environment among other things”.

Calling terrorism a grave threat to the entire world, Kovind said, “We should deepen our cooperation further to defeat and destroy this global menace.”

India told a high-level event on peacekeeping that working in partnerships is key to successful peacekeeping, underlining that professional competence of those engaged in all aspects of this global enterprise cannot be substituted or compromised.
India along with Portugal, Senegal, Uruguay and Vietnam co-hosted the high-level event Improving peacekeeping performance: A year since UNSCR 2436′ initiated by the US here Friday.

UN Secretary General Antonio Guterres thanked the US and the event’s co-hosts, India, Portugal, Senegal, Uruguay and Vietnam, for convening the event and for their support to United Nations peacekeeping operations.

India believes that even while broad participation in peacekeeping is important to enhance global solidarity, there can be no substitute for professional competence of those engaged in all aspects of this global enterprise, India’s Permanent Representative to the UN Ambassador Syed Akbaruddin said in his address at the event. Working in partnerships is key to successful peacekeeping.

He stressed that guidelines require that the Peacekeeping Capability Readiness System (PCRS) should be the sole mechanism for the selection of a military or police unit for deployment.

A diversity in terms of deployment needs is understandable, and some variations are inevitable. However, choices and selections need to be made from within the same spectrum of options, he said, adding that those not part of the PCRS are best avoided.

Akbaruddin also highlighted that in selection, units without caveats should have precedence over units pledged with caveats, as these will not tie down the hands of Force Commander in operational decisions.

In short, we need to have a selection policy’ that is a natural extension of the PCRS to ensure that the most ready, capable, well-equipped and willing contingents are selected for deployment, he said.

He also stressed on the need for instances of under-performance to be assessed, saying such assessment needs to examine whether there were units available at higher levels in PCRS that were overlooked during selection; whether caveats have impacted performance; whether poor performance is due to lack of resources, including equipment; or whether the mandate, including guidelines, were not clear, resulting in unsatisfactory implementation.

Honest assessment and feedback is essential to have an effective accountability system. Assessing performance without determining accountability will leave us open to repeating errors, he said.

India is among the largest troop contributors to UN peacekeeping. India has co-deployed troops from Kazakhstan as part of its battalion in the United Nations Interim Force in Lebanon.

Performance is also the responsibility of Member States as troop and police contributors, host governments, members of the General Assembly, as financial contributors and providers of capacity-building support.