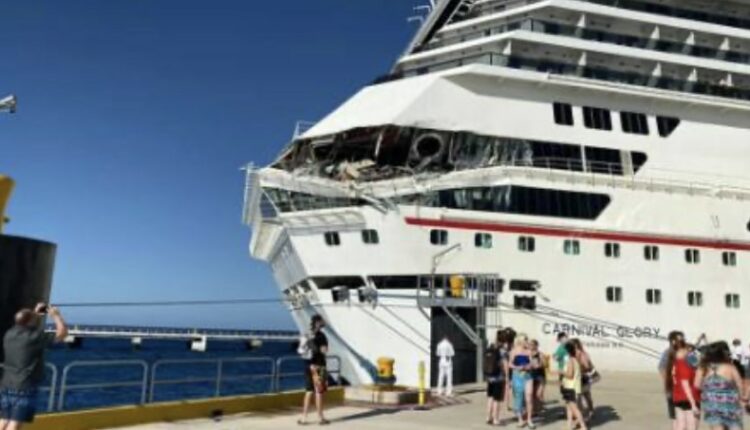 Two cruise ships namely the Carnival Glory and the Carnival Legend, collided into one another while docked in Cozumel, Mexico. The incident was recorded early Friday morning

Eyewitness’s recorded videos of the aftermath show a portion of the Carnival Glory’s deck bring left crushed. However, the assessment of damages is still under way but there seem to be no issues that would impact the seaworthiness of either cruise ships. The collision left one passenger injured.

Six guests who had secured minor injuries from the collision were sent to the Carnival Glory medical center for health checks and evaluations.

Carnival explains the mishap as “an allision between the two ships”. An allision is a nautical term used to describe when a moving ship collides with a stationary object,such as another ship.

The Carnival Glory cruise ship was “maneuvering to dock,” and in the process, hit the Carnival Legend, which was already docked at the marina.

At the moment, either of the cruise liner’s itenaries remain unchanged and unaffected by the collision as guests have conveniently taken the day off to explore the shores.

A passenger on the Carnival Legend, Mary Anne McKinley opined that the crash wasn’t too bad and it felt like the crashing of a big wave onto the ship. Another passenger on board the Carnival Glory, Maddison Haynes, agreed to this very description.

Maddison Haynes said that the night before, the ship experience some major motion so it was automatically assumed that something of the similar sort had taken places. The collision felt like a jolt but nobody thought much of it.

An on board announcement after the collision claimed that the incident was caused by currents. High winds were also a factor involved in the collision.

Videos of the collision taken by the bystanders and eye witnesses have been shared widely over social media in the past 24 hours.

How to Manage and View Saved Passwords in Chrome