BIMSTEC: Everything about Bay of Bengal Initiative for Multi-Sectoral Technical and Economic Cooperation 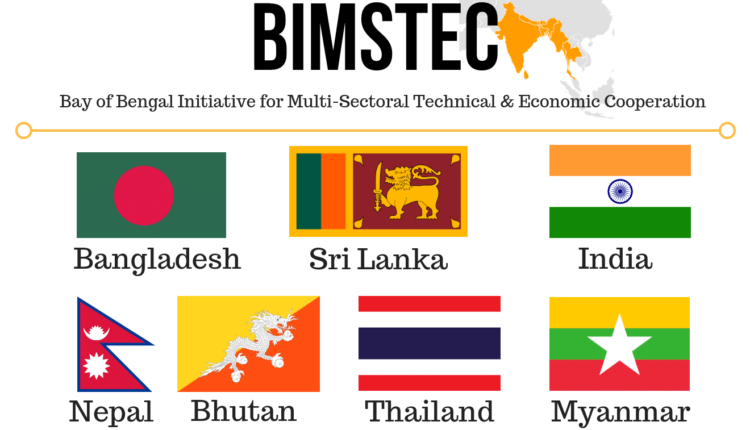 Becoming the Prime Minister of the World’s largest democracy is a very big accomplishment. Since we are referring to the World’s largest democracy, it also happens to be significant. The World’s Largest Democracy described here is India. It was the day of 23rd May that the Bhartiya Janata Party emerged victorious by a huge margin in the 2019 Lok Sabha elections and conquered 303 seats. Post winning, the swearing-in ceremony of India’s 15th Prime Minister took place on 30th May 2019. Narendra Damodardas Modi was sworn-in as the Prime Minister of India for the second consecutive time. 58 ministers were also sworn in along with him by the President of India, Ram Nath Kovind. Around 8000 guests were invited to be a part of this grand event. Of these the most discussed were the BIMSTEC Members.

Bay of Bengal Initiative for Multi-Sectoral Technical and Economic Cooperation is what BIMSTEC stands for. Comprising of seven member states, it is a regional organization. As the name goes by, these states or members surround the Bay of Bengal and thus are united on regional grounds. Born on 6th June 1997, BIMSTEC has seven members. India along with Bangladesh, Bhutan, Nepal, Sri Lanka, Myanmar and Thailand are the constituent members.

Knowing the history of an organization is a must, in order to know about its reason of existence. When the BIMSTEC came into existence, it had four countries as members and was therefore called BISTEC. On 22

nd December 1997 Myanmar joined BISTEC and thus BIMSTEC (Bangladesh, India, Myanmar, Sri Lanka and Thailand Economic Cooperation) came into being. The inclusion of Nepal as an observer, in 1998 took place. Bhutan and Nepal became full members in the year 2004.

Acting as a bridge between the South and South East Asian countries, BIMSTEC aims at developing healthy relations between the member states. BIMSTEC is also another platform for the cooperation between SAARC and ASEAN members. Covering around 22% of the entire World Population, BIMSTEC homes nearly 1.5 billion people. By utilizing and taking advantage of the regional resources, BIMSTEC was formed to accelerate growth in areas of common interests. Now what differentiates BIMSTEC from any other regional organization is that it is further segregated into 14 sectors. Those sectors are Trade & Investment, Transport & Communication, Energy, Tourism, Technology, Fisheries, Agriculture, Public Health, Poverty Alleviation, Counter-Terrorism & Transnational Crime, Environment & Disaster Management, People-to-People Contact, Cultural Cooperation and Climate Change.

By contributing 33% of the expenditure, India is one of its significant members. It is a good thing that different nations have joined their hands together towards the betterment of people. If these organizations are driven by good ideas and motives, they will definitely succeed in accomplishing their goals.