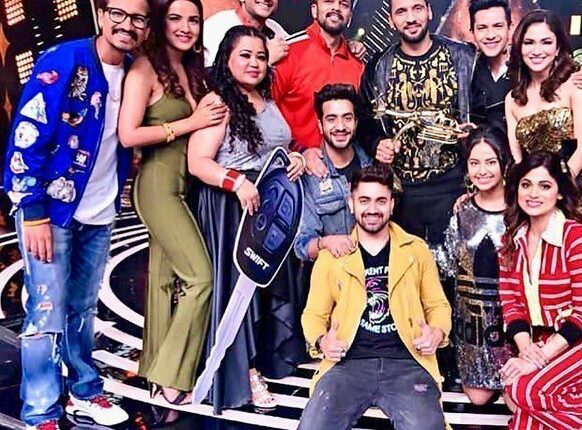 All the contestant from the beginning of the show came to attend the Grand Finale and also sing and dance with the Rising Star season 3 contestant and promote it. Akshay Kumar, well-known superstar of Indian cinema perform the stunt live on Grand Finale of Khatron Ke Khiladi. He also gave the task to Harsh, Bharti’s husband to sing and walk through the water tub filled, which is filled with snakes, which is soo funny to watch. Akshay being the first host of Khatron Ke Khiladi praised the show very much and also tried to sing with Shankar Mahadevan, singer and one of the judges of Rising Star season 9. He also launched his upcoming movie ‘Kesari’ trailer on Rising Star season 3.

Bharti  Singh being the evergreen laughter queen, did a lot of comedy in whole Khatron Ke Khiladi season 9 and during Grand Finale Akshay asked her to kiss Harsh with blindfold, she said yes thinking it must be her husband but Akshay bring Leopard whose name his Harsh and Bharti got so feared after seeing that and others just laughed seeing her.

Will Charlton athletic be able to get into the Championship?