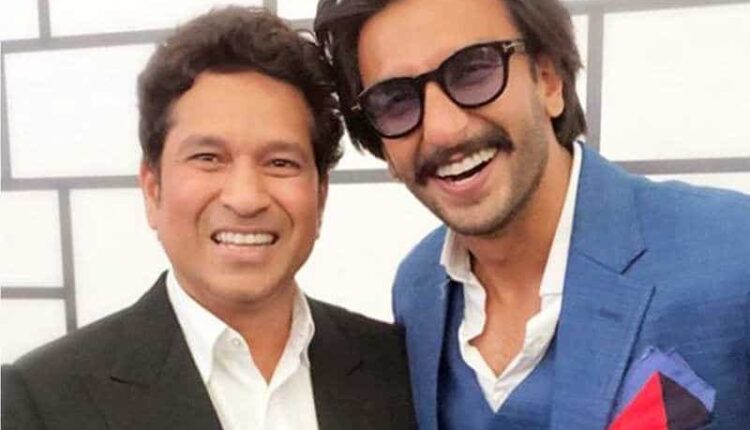 Ranveer Singh is currently busy with his upcoming film ’83. He will be seen portraying the role of Kapil Dev in the film. Taking time out of his busy schedule, he was present for an event with his ’83 squad, along with some legendary cricketers like Sachin Tendulkar, Sir Vivian Richards and Wasim Akram. Ranveer not only met them but also clicked a few pictures.

Being a cricket fan, Ranveer had many fanboy moments at the event he attended. As per reports, Ranveer purchased a bat signed by Sachin Tendulkar, Wasim Akram and Vivian Richards for a huge amount of 2,000 pounds. In Indian currency, the cost for the bat is approximately Rs 1.75 lakh. Ranveer didn’t want to miss any opportunity to win the autographed bat at the auction. He made this sure with 2000 pounds bid.

Ranveer’s upcoming film is also cricket related which is based on India’s historic win against West Indies at the 1983 Cricket World Cup. The film is directed by Kabir Khan and produced by Madhu Mantena and Vishnu Indri. The film also features Saqib Saleem, R Badree, Harrdy Sandhu, Chirag Patil, Pankaj Tripathi, Ammy Virk and Saahil Khattar in lead roles. Ranveer’s real-life wife Deepika Padukone will play his onscreen wife in the film. She is portraying the role of Romi Bhatia, wife of Kapil Dev.

Who will play who in the film?

One great update of the film is, Kapil’s daughter Amiya Dev is a part of this film too but not as an actor.  She is joining the director Kabir Khan as an assistant. She just completed her graduation, and all set to gear her career up in film making.