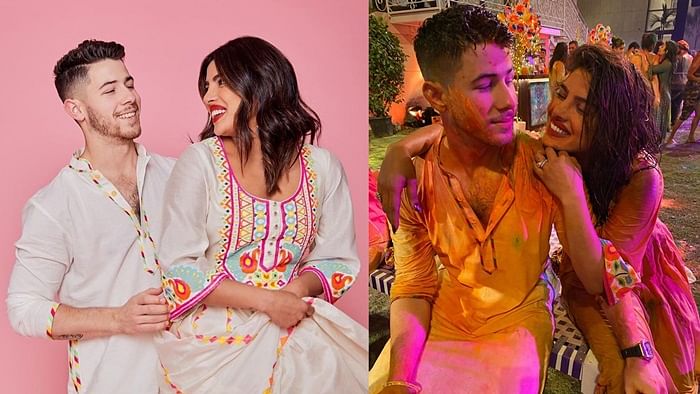 The 27-year-old Jonas Brothers singer, Nick Jonas and 37-year-old actor (female) Desi Girl  Priyanka Chopra, the Bollywood star recently celebrated Holi in India. It’s the first time when nick has taken part in this Hindu festival Holi. Both Nick and Priyanka were part of Isha Ambani Pairamal’s Holi celebration. Pre Holi celebration party was thrown by the Ambani family at their residence in Mumbai. The party was attended by close celebrities from industry, close friends and some other Bollywood stars.

On the occasion of Holi, both Nick and Priyanka decided to keep it traditional. They both appeared in white traditional attire. Jonas wore a Kurta and Pajama featuring neon embroidery at the borders. While Desi girl Priyanka was seen wearing a beautiful ethnic off-white embroidered attire with a multi-colored neon design with the strappy heels.

She makes me smile a lot. #holi

In one of the pictures posted on Instagram, Nick is seen looking into the eyes of Priyanka, his beloved wife. In the second picture Nick, Priyanka and Katrina Kaif pose for the selfie. Last includes a short selfie video in which Nick was seen giving glimpses of the celebration with the caption “My first Holi! (Five days early) So much fun celebrating with such incredible people here in my second home India. #holi ”

The second post includes the pre-festival photo shoot. Which includes Nick Jonas has his arm folded over Priyanka with the caption “She makes me smile a lot. #holi”

In July 2018 Nick and Priyanka got engaged after just 2 months of dating. After that proceeded to get married in December 2018 with an unrestrained 3-day wedding with a list of people to attend including India’s Prime Minister Narendra Modi and other famous celebrities.

Holi is a festival of love, an ancient Hindu festival that praises the triumph of good over evil. This festival also signifies the arrival of spring. It is well known as the festival of colors.

Happy Holi to everyone in advance!