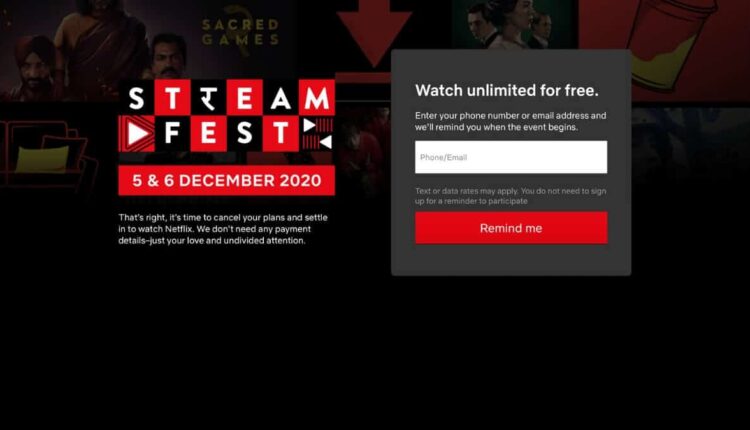 Enjoyed Netflix StreamFest but haven’t had enough binge-watching? Then worry not, cause Netflix is back with StreamFest round two!

The world’s biggest streaming service has quietly extended its free promotion, just days after it first ran (December 5–6). Netflix StreamFest is back for round two, running from Wednesday, December 9 at 9 am to Friday, December 11 at 8:59 am. As before, Netflix StreamFest is exclusive to India, allowing everyone to watch whatever they like on Netflix for free for the 48-hour period. It’s not without its caveats, though. Netflix StreamFest is limited to a single standard-definition (SD) stream, and Netflix also limits the number of free viewers, though that should be less of a concern during the week.

Unfortunately, Netflix won’t allow you to pay a nominal amount to upgrade to a high-definition (HD) stream. If Netflix in SD doesn’t work for you — it’s free, what more you can ask for — the streaming service also offers a limited selection of original movies and TV series, without even creating an account. That comes with high-definition (HD) video but it only works in the browser on Android, Windows PCs, and Macs.

Netflix StreamFest is much less restricted when it comes to devise support. You can watch Netflix for free on Android, iPhone, smart TV, gaming console, Chromecast, or in a browser. Netflix StreamFest users can also create profiles, add things to “My List”, tweak parental controls, change the UI language to Hindi, and pick any subtitles or dubs they like. To get started, head to Netflix.com/StreamFest, provide a name, email address, and password. And you’re set.

Moreover, if you previously had a Netflix membership on that email, you’ll get to pick up right where you left off. That also goes for everyone who signed up for Netflix StreamFest the first time around this past weekend. It’s a little curious that Netflix India has decided to extend the free promo during the week, instead of waiting for the next weekend when people are more likely to have more free time. Or maybe that’s exactly what Netflix is betting on.

The National Institute of Rural Development and Panchayat Raj Is Inviting the Applicant For Admission To 2021, Academic Session