Mahhi Vij, the Balika Vadhu actress, is accused of not paying the dues of online websites. The celebrity appeared in a big boss as a guest with her husband, “Jay Bhanushali.” The actress has been very active on social media and bold with every criticism. Mahhi was recently called out by trollers “Shaaram Kar Moti,” to which she replied, “was your mother thin after delivering you.” Now she is back in the news! Keep reading to know everything in detail.

Made for her is an online website wherein many famous faces like “Neha Kakkar,” “Sunny Leone,” and “Yuvika Chaudhary” buy clothes from the site for shoots or reality shows. The website posted a picture on 26th July 2020, with highlights on “True face of Mahhi Vij.”

The post consists of chats, which shows that Mahhi has been wearing clothes supposed to reach out to Shehnaaz Kaur Gill. Mahhi placed an order in December to Made for Her website for her friend Shehnaaz Gil of approx 30 outfits. Only returned 14 outfits by courier.

This is an issue which we need to bring forward. How unethical and low mentality these famous faces are. mahhivij is one of them. At the time of Big Boss , she sourced outfits from us for @shehnaazgill and that was an outsourcing only. After big boss got over we asked her to send the outfits back , she sent few and kept rest of the outfits with her , when asked she said she will send them asap. We saw her wearing those outfits without even informing us. Isn"t this such a shame that being a famous face you want to wear new outfits but not willing to pay for them ? . You are asking outfits for someone else and keeping them and flaunting them shamelessly. Being asked again and again she ruthlessly made an excuse of being a mother. Like you weren't a mother when you were wearing our outfits and roaming in them. She only owe 25k to us which she isn"t able to pay and making excuses and blocked us. We wonder how you worked in the industry , is this your true face? Pretending to be the sweetest on social media and such an unethical person inside.! (Ps- Stop dragging shehnaaz . This has nothing to do with her. We only have an issue with maahi vij. )

The website claims that Mahhi still holds 16 outfits, which cost around 25 thousand. Mahhi wore two outfits out of those 16 outfits. The site is asking for money from the past five months. The website owner kept asking for the money or at least to return the clothes; however, the celebrity kept making excuses for her new motherhood and quarantine as per the website.

Mahhi Vij’s Reaction to the accusation:

Mahhi Vij replied on the post with three comments: “she mentioned them publicly on her post that her outfits were from Made for Her website.” She also claims that “the website is doing this all is a publicity stunt.” The actress also went on her social media posting stories with comments like “2 minutes Fame”, “Work with people with Authenticity,” and more. Also, a page named Mrkhabri posted the story to his audience to which the celebrity replied that “She will pay the dues but couldn’t due to lockdown, and she also tagged them on the post.”

Mahhi placed the order in December, and Big Boss 13 ended on 15th February 2020. The borrowed clothes were supposed to return as Bigboss 13 ends. Also, lockdown started around 17-20 March 2020, and the courier services are started again on 20th April 2020. 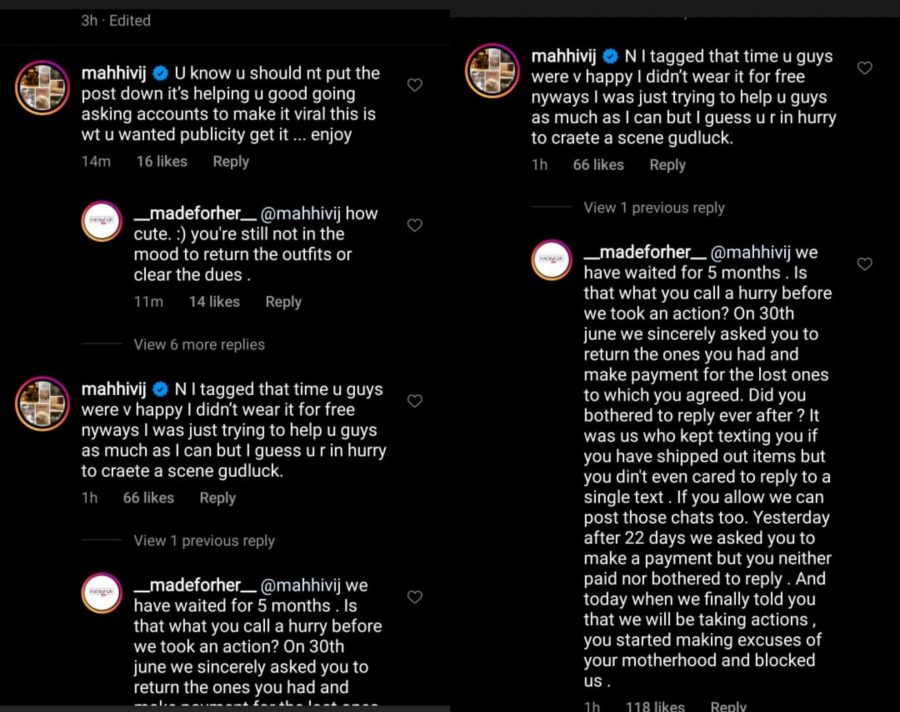 The fans are on Mahhi Vij’s side that Mahhi Vij never hid the fact that she had the clothes, but she mentioned, “I wore this top.” Comments are flooding on the made for her websites post. Half of the online sites are opening up about the same incidents, and there are few fans against the whole scene commenting like “You dont need 25 thousand, but you need fame”.

The Shehnaaz fans are also commenting that this is all indirectly to “defame Shehnaaz.” The website mentioned that this has nothing to do with Shehnaaz, but Mahhi Vij ordered the clothes. The post has received approx 2000 comments, with some of them asking the website to apologize to the celebrity for publicly humiliating her.

Also, a celebrity named Mahira Sharma, who appeared in big boss and Naagin television series, posted a story in support of Made for her website commenting, “You are not ashamed of being a celebrity.” The story was taken down soon after in 3-4 hours.

Mahhi Vij is married to Jay Bhanushali, who has two adopted kids named Khushi and Ranveer. She also gave birth to her biological daughter named Tara. Won Gold Award for Best Actress in a Lead Role for the serial named “Laagi Tujhse Lagan.” The actress also shared her views on motherhood and was showcased in Baby and Toddler Magazine.

Made for Her is a website that was launched in 2017 by Naina and Alisha Jindal. They belong to a middle-class family that covers five pages on Instagram with approx 100K followers. They have outsourced clothes for television actresses like Ankita Sharma, the famous singer Neha Kakkar, Yuvika Chaudary from Roadies, Miesha Iyer from Splitsvilla, and more. The merchandise products like dresses, tops, sets, jumpsuits, and loungewear. Also, accessories like footwear, bags, Jewelry, etc.

The real question is, Will Mahhi Vij pay for the dues? Is it okay for a celebrity not to pay the online website’s contributions just because they are tagging them for the source of attire? Is it so hard for a middle-class person running an online business to speak up against a celebrity?