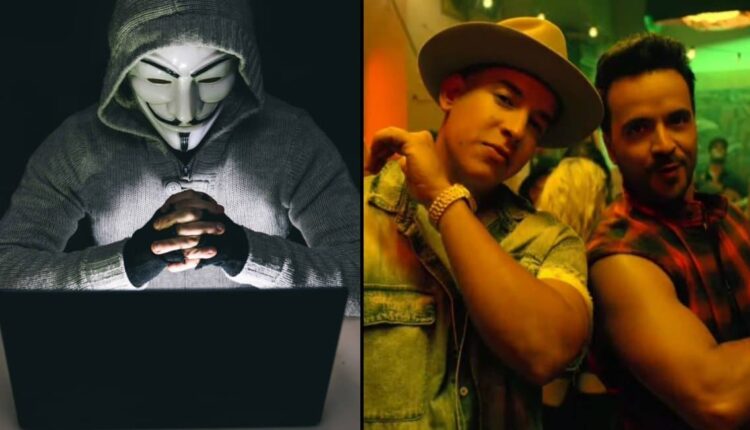 The record-breaking Spanish language song Despacito has disappeared from YouTube looking in an apparent hack.

Just five days ago, Luis Fonsi’s chartbuster Despacito became the first video to reach 5 billion views in the history of YouTube. The video was deleted by a group of hackers.

Now, upon search a still is shown on YouTube showing some masked figures aiming guns at the camera. The still is clearly not the scene from the song Despacito, which also features Daddy Yankee. When one press plays the song, it shows video is not available.

Some other popular artists like Taylor Swift, Shakira, Drake and Selene Gomez have also been affected by this apparent hack. It seems like the video uploaded by Vevo have been affected.

The hackers, who go by the name of Prosox and Kuroi’sh also added a message underneath the video. The message reads, “Free Palestine”. At the time of writing, there are still several stills available on the popular streaming site.

If you are not aware of the song, you must be living under the rocks. Despacito is a Spanish language song, which was released in January 2017. The song became an instant hit in the music industry. It also became the first single with the most weeks at No. 1 in the United States after securing the top position for 16 consecutive weeks.

After reaching 4.6 billion views on YouTube, the song became the most viewed song in the world. In addition to the original track, a remixed version featuring the voice of Justin Bieber also became a super-hit.

According to the report of popular news channel BBC, a Twitter account that appears to belong to one of the hackers wrote, “It’s just for fun. I just use [the script] ‘youtube-change-title-video’ and I write ‘hacked’. Don’t judge me, I love YouTube,”

YouTube has not issued any reaction on the same as of now.

What do you think of the same? Tell us your thoughts in the comment section down below. Stay tuned to Headlines of Today for all the latest updates.

All About the Friends Reunion at HBO Max

Caught by a Wave: Release Date, Cast, Plot, and Trailer