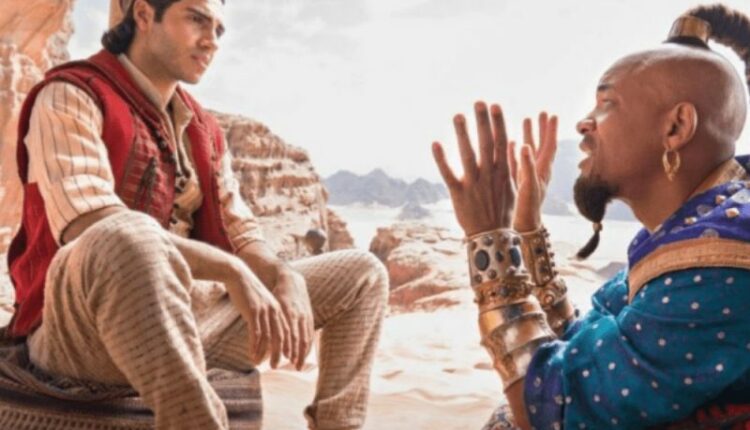 Check out the new poster for Disney’s #Aladdin as debuted by #WillSmith.?‍♂️
See the first look tomorrow! In theaters May 24th, 2019. pic.twitter.com/azcaiXPZcX

Aladdin movie based on the Arabic folk tale of the same name ‘Aladdin and the Magic Lamp’ from One Thousand and One Nights and ‘Les Mille et une Nuits’ by Antoine Galland and also on Disney animated ‘Aladdin(1992)’ movie.

Aladdin is the story of a poor boy named Aladdin, who lived with his mother. One day Jafar ask him for a work instead of that he promises to give him lots of money. He takes Aladdin inside the cave and asks him to bring an old lamp, but Aladdin saw a lot of gold inside and he filled his pockets with gold and also take the lamp but the door of the cave get shut suddenly and he can’t get out.

Aladdin tried a lot but after sitting alone he gets bored and started cleaning the lamp and suddenly the place filled with fog and a voice said, ‘My Master, I am the genie of this lamp. What is your wish? Aladdin looked at the man and asked him ‘to take him home’.

Genie did what his master asked and take him home and later he fulfilled all wishes of Aladdin like a palace instead of an old hut. Aladdin became popular and get married to Princess Jasmine, daughter of Sultan. Jafar found about this soon and went to Aladdin house and somehow he exchanges the old lamp with the new one and became the master of the lamp.

Jafar told Genie to send Aladdin palace to the desert and his wife. Aladdin when don’t find his house get suspicious about Jafar but as he had Jafar ring, he rubbed it and another genie appeared and he asks him to take him where his wife and palace were.

Aladdin soon meet his wife and Jafar was also there, he secretly grabs the old lamp and rubbed it and became the master of the lamp again and asked Genie to send Jafar far away from here so he can’t get back and also asked him to back to there place. Later Aladdin and his family happily lived ever after.

Aladdin movie already in a lot of controversies. People expect Arab or Middle Eastern actress instead of half-Indian actress Naomi Scott for the lead role of Princess Jasmine and also drawn accusations of colorism.

Your laptops overheating? 5 things you can do!

Deepika Padukone Wants To Be The Minister Of Swachha Bharat Abhiyaan