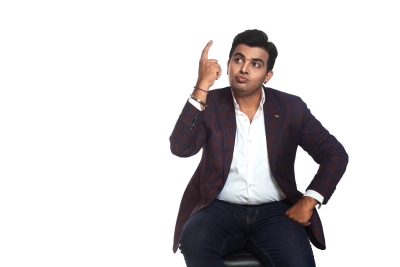 Mumbai, Jan 15 (IANS) Stand-up comedian Amit Tandon will debut on small screen as the host of the non-fiction show, ‘Goodnight India’, along with TV actor Jiya Shankar. The show will feature different acts pegged on relatable and contemporary topics.

Commenting on hosting the show, Amit said: “It’s my first stint with television, and I can’t put to words my excitement. Even today, I feel television is the most prominent medium around, and this opportunity allows me to reach a different set of audiences that I had never catered to previously. With ‘Goodnight India’, I would be talking mainly to an audience sitting at home and watching the show.”

He further shared that he is thrilled to learn this whole process of not just talking to the live audience but millions of people through camera who are watching him at their comfort in their living rooms.

“It is a great learning experience, and our sole purpose with ‘Goodnight India’ is to help viewers de-stress through some light-hearted entertainment and make their last half an hour of the day a happy one. I can already feel the nervousness and excitement at the same time, so keeping my fingers crossed and hoping that the audience loves the show.”