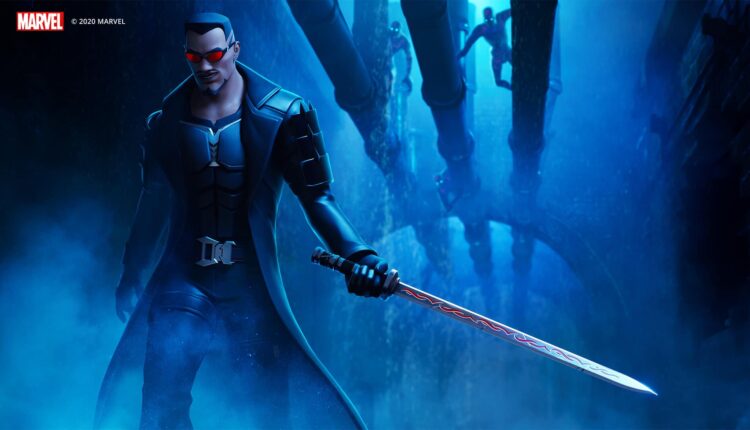 After a pretty revealing tease a few days ago, Epic Games has finally confirmed that Blade, aka the Daywalker, arrives on Fortnite. The character is already available for purchase in the game’s item store.

Blade joins the game amid Fortnite’s ongoing Nexus War event. The insanely popular online multiplayer game already boasts a stacked list full of high-profile Marvel characters. The arrival of the Vampire Hunter is sure to boost the game’s popularity even more.

Currently, two variants of the character are available in Fortnite. Players can get the Marvel character by buying the base Blade pack priced at 2000 V-bucks. It includes two variants of Blade, added with two versions of his sword. Additionally, the complete Blade set can also be bought for 2300 V-Bucks. Apart from the outfits and the sword, the whole pack offers a glider, and an emote.

The revealed image from Fortnite further suggested that some unique enemies would also join the fray alongside Blade. Besides, considering the Daywalker’s supernatural origins and the upcoming Halloween season, it could hint at the Fortnightmares event.

If you have never heard about Blade before, let us do the introductions. Blade is a fictional character who is half-vampire and half-human. His unique physiology allows him to be members of both the human and supernatural world. Furthermore, unlike other vampires, he is immune to sunlight and other traditional vampire weaknesses, thus he is also known as Daywalker.

Despite having three solo films, Blade is one of Marvel’s lesser-known characters. However, Marvel has recently announced a new Blade movie starring Mahershala Ali. So it makes sense that the company is pushing him into other popular media ahead of the anticipated movie release.

Fortnite’s current event since August is the Nexus War. It revolves around the Marvel characters banding together to defeat the world devourer, Galactus. Blade’s inclusion in the game is only the latest addition. However, some eagle-eyed gamers noticed some more surprises heading our way. According to recent reports, Spider-Man and Black Panther, two immensely popular Marvel superheroes might join the roster very soon.

Fortnite is now available on PC, PS4 and Xbox One.