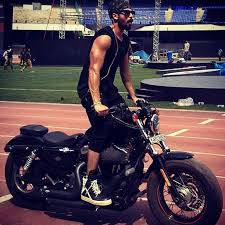 After being admired for his amazing performance in Padmavat, Shahid signed the movie Kabir Singh. The talented actor of Bollywood Shahid Kapoor is currently busy with the same film. The film Kabir Singh is the remake of Telugu blockbuster film Arjun Reddy. It is going to release on 21st June this year. Kiara Advani will be seen in this movie alongside Shahid Kapoor. It is being said that he has signed a big budget film and he is going to start shooting for it.

Shahid Kapoor will be seen as a bike racer in this film. Shahid loves to ride a bike in his real life and therefore this role is well suited for him. He is being very preparative with his body for this film. Fans are expecting Shahid Kapoor to perform bike stunts in this new film. Another cast for this film is unknown yet. The casting procedure is in the process, according to reports.

Shahid recently bought BMW R1250 GH adventure bike. He proudly posted a picture of his bike on his Instagram page. He already owns Ducati Scrambler 1200, a Harley-Davidson Fatboy and a Yamaha MT 01.

According to Bollywood Hungama, “This will be one of the most expensive films to come out of India. The director of the film is yet to be finalized and the makers will make a formal announcement when the time is right.”

We have witnessed the genre of ‘biking film’ with the Dhoom franchise. The instalments of this film had always one thing in common that is the fancy bikes. According to reports. he will start shooting for his biking film after he finishes the shooting of Kabir Singh. We are waiting to see the sporting look of Shahid Kapoor, and we are sure he is going to rock that look.

Shahid Kapoor is also going to be featured in Dingko Singh’s biopic. It is said that the shooting of this film will start soon. Raja Krishna Menon is going to direct this film. Dingko Singh is the boxing champion of India who won a gold medal at Asian Games in Bangkok. He was awarded by Padma Shri by Government of India in 2013.

Will Charlton athletic be able to get into the Championship?