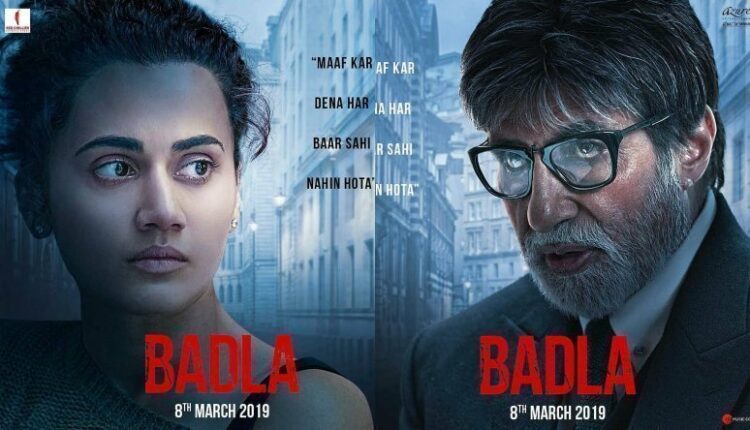 The fantastic duo of Amitabh Bachchan and Tapsee Pannu is back after Pink and they will be seen in their upcoming movie called Badla. The trailer of this movie is out and on its first day, it was trending on #1 positions on YouTube.

It was released by Red Chillies Entertainment on 12th February 2019. The trailer created very strong suspense in people, and everyone is just waiting for 8th March to get this movie released. It is said that this movie is the remake of 2016 Spanish film “The invisible Guest.” Badla is directed by Sujoy Ghosh who is the writer and director of the film Kahaani.

Amitabh Bachchan is portraying a role of the lawyer Badal Gupta who is famous for not losing any case in his 40 years of career. Tapsee is playing the role of a girl called Naina who was shown locked in a room with the dead body of her lover and her hands covered with the blood.

Tapsee gets accused of this murder case and she thinks that someone is taking revenge against her. This film also has Manav Kaul and Amrita Singh in pivotal roles. It is rumored that Shah Rukh Khan will be having a cameo in this movie.

The trailer looks so promising that movie critics and film buffs can’t stop praising both the lead actors on twitter and other social media handles.

This trailer is full of interesting dialogues and fans are going crazy on the internet by making funny memes using those lines. Hence, along with the grippy story, this trailer also gave some strong lines to the fans.

This trailer gives us some mystery murder thriller vibes. Let’s see if Amitabh Bachchan saves Tapsee Pannu or not? They both look absolutely fabulous in their roles. Both are playing almost similar roles as they played in their earlier movie Pink but Badla has a completely different plot.

Amitabh Bachchan will be seen in his upcoming Sci-Fi movie Bramastra with Alia Bhatt and Ranbir Kapoor. Tapsee’s upcoming movies include “Saand ki aankh”, “Tadka”, “Mission Mangal” and “Womaniya”. Seems like Tapsee will have her 2019 very busy.