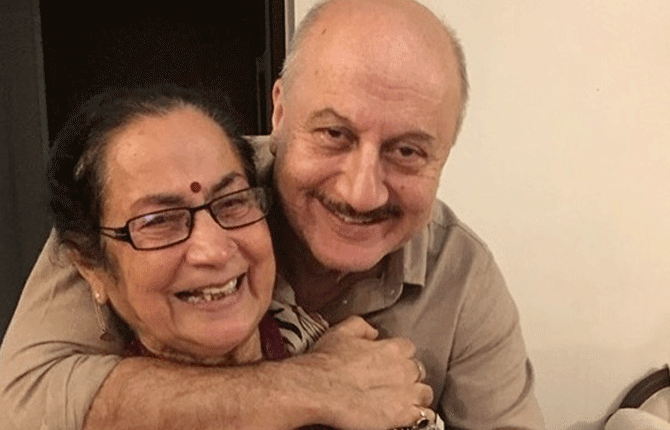 Corona Virus has now reached to the house of actor Anupam Kher after Amitabh Bachchan and Abhishek Bachchan were found corona positive. Four members of the Kher family including mother Dulari Devi have been recorded positive. The actor himself gave the information about this by sharing a video on social media. He said that this brother, sister-in-law, and niece also had mild symptoms after which he has quarantined himself.

While sharing the video, Anupam wrote, ‘I am informing you that my mother Dulari Devi has been found corona positive (mild symptoms). We have admitted him to Kokilaben Hospital. My brother, sister-in-law, and niece have been found to have mild symptoms even after being cautious. I too had myself tested, and I turned out to be negative. I have given information to BMC. ‘

Anupam: Mother was not feeling hungry for many days

In the video, Anupam said ‘Hello friends, for the past few days my mother whom you know by the name of Dulari was not feeling hungry. She was not eating anything, kept sleeping, so we got her blood tested on the advice of the doctor in which everything turned out well. Then the doctor said that you take them to the city scan center and scan them there. So we got the scan done in which her COVID test came out mildly positive. I and my brother were with them, so both of us also got our city scan done. In which Raju was mildly positive and I was negative.’

Brother, sister-in-law, and niece have quarantined themselves

He further said, ‘Then we also spoke to our family, my sister-in-law Reema, my niece Vrinda and my nephew Praneeth were also city scanned, in which my sister-in-law and niece turned out to be positive, and my nephew Praneeth came out negative. After this, I took my mother to Kokilaben Hospital, where she helped us a lot while admitting. My brother and his family have quarantined themselves in their home. I have informed BMC, which is working very well. They have gone to my brother’s house, will sanitize them.’

Anupam said, ‘It was my duty to inform all of you, that if a member of your household, especially your parents, is not feeling hungry, then get them tested once. Because we kept thinking for a long time why we are not feeling hungry. The doctors are doing a great job in this phase, I encountered them yesterday. I made this video to inform you all. Your prayers, your blessings will soon heal my family and my prayers and my love are with all those people who are suffering from this disease. Thank You.’