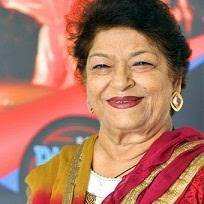 The famous choreographer Saroj Khan is no more. The reason for her death is a cardiac arrest which she got on Thursday’s late night. She was not well from the past few days. She was having problem in breathing. However, her test for COVID-19 was recorded negative. She was hospitalized on June 24. She was admitted to Guru Nanak Hospital. Today her last rites will take place at Malwani, Malad.

She has choreographed around 2000 songs in her career of 40 years. She has won the national award thrice. The known faces of Bollywood like Sridevi and Madhuri Dixit were seen dancing in her direction. She has also taught the dance steps to the actors of Tollywood.

Geetaa Mera Naam was her debut as a choreographer in the industry which was released in 1974. The lead actress of this film was Hema Malini. The hit songs which were choreographed by her are Hawa Hawai from Mister India (1987), Ek Do Teen from Tezaab (1988). Madhuri Dixit rocked the industry after this release. The famous songs lists contain Geet Dhak Dhak Karne Laga from Beta (1992) and Dola Re Dola (2002).

Saroj Khan last choreographed a song in 2019. She choreographed Tabah Ho Gye from Kalank. Her favorite actress, Madhuri Dixit, gave an appearance in this song.

The health of Saroj Khan deteriorated on June 24. She was admitted to Guru Nanak Hospital. She was having a problem with respiration. After this, doctors took samples for her corona test which was later found negative.

Shared a video for the prevention of corona

Saroj Khan shared a video on Instagram in May where she was seen appealing to the citizens of the country to respect the corona warriors.

Never have I Ever Season 2: Plot, Cast and more