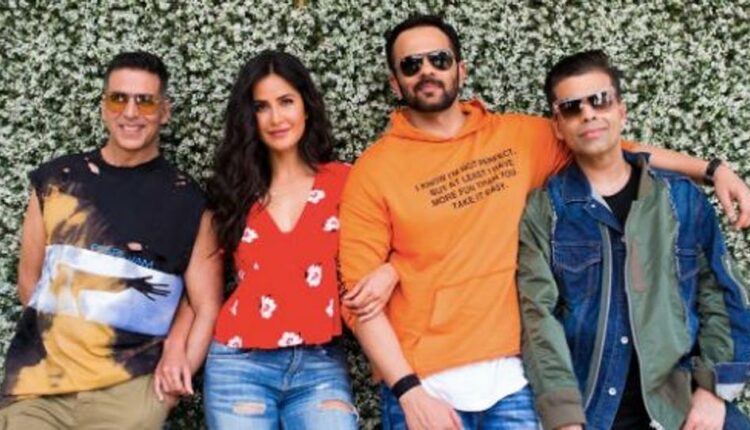 After Singham and Simmba, Rohit Shetty is all set to make his third cop film ‘Sooryavanshi’. After many speculations, the film has finally found a leading lady and that lady is none other than Katrina Kaif. The lead actor Akshay Kumar will be seen as Veer Sooryavanshi, chief of the Anti-Terrorism Squad.

Akshay and Rohit took to Instagram to announce the news about Katrina’s joining the film. “Welcome to our COP UNIVERSE, Katrina Kaif …OUR SOORYAVANSHI GIRL!” he captioned a picture of him and Katrina along with Rohit and co-producer Karan Johar.

Akshay and were seen together in past in films like Singh Is Kinng, Namastey London, Hum ko diwana kar Gaye and Welcome. The last movie they did together is Tees Maar Khan in 2010. Ever since fans are excited to see these two together on the big screen and now Sooryavanshi made it possible.

It is being said that the Sooryavanshi is a remake of the Kannada blockbuster Tagaru, which released last year but there is no confirmation from filmmakers yet. The film Sooryavanshi will go on floors next month and will release on 22nd

Katrina Kaif is busy with her upcoming film ‘Bharat’ with Salman Khan which is already making headlines with its posters and teasers. Poster with Salman Khan’s different looks is trending on the internet. The film Bharat is releasing on 5th June 2019.

The film Sooryavanshi will mark her first project with the director Rohit Shetty.  She shared the news on her Instagram. “Super excited to join the team of Sooryavanshi with the incredible @itsrohitshetty for the first time, can’t wait to be back on set with @akshaykumar after so long. My 1st film with @dharmamovies and @karanjohar @reliance.entertainment @rohitshettypicturez @dharmamovies #CapeOfGoodFilms.”

For Akshay Kumar, on the work front,  other than ‘Sooryavanshi’, he has films like, ‘Mission Mangal’, ‘Good News’ and ‘Housefull 4’ is on his to be released list.