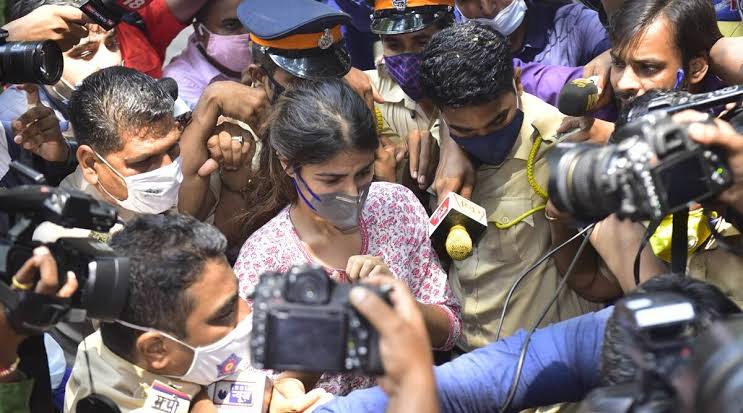 On Sunday, actress Rhea Chakraborty was mobbed by the media when she was on her way into the Narcotics Control Bureau (NCB) office , despite being covered by police officers. Many celebrities have called out the media behaviour, terming it as barbaric.

Many celebrities posted on social media about this incident. Here are few tweets.
Shibani Dandekar expressed her concern on Instagram Story “Media vultures. The press is behaving barbaric. Is there no one in authority that can end this”.

Actress Gauahar Khan was upset and tweeted that. “I haven’t seen the worst of the criminals being treated like this even after being convicted! Let there be a trial!!! Absolutely disgusted with the way the media is treating her! #shame,” she tweeted.

Filmmaker Hansal Mehta reacted on media for breaking social distancing rules amid the coronavirus pandemic and posted posted a news channel video of Rhea being hounded by scores of media personnel, and was caustic in summing it up with two words: Social distancing.

Producer Manish Mundra tweeted that This is absurd! This should never happen to anyone! This should end now. What are we turning our nation into? This is not how civilized society functions. Let justice be done but then the road to justice shouldn’t look like this.

Diya Mirza tweeted “The law must and will take it’s course. This behaviour reprehensible in every way. Enough! Why can’t Rhea be given space and the right to physical distancing? Why are the media behaving like vultures? Please please give her space ?? Stop attacking/dehumanising her & her family”.

Huma qureshi tweeted “What is wrong with us ?? We cannot behave like this. Sure the truth must come out but this girl deserves her space as a woman , basic respect and her right to social distancing norms”.

On Sunday Rhea is being integrate by NCB over a drug angle in the death of her boyfriend, actor Sushant Singh Rajput.