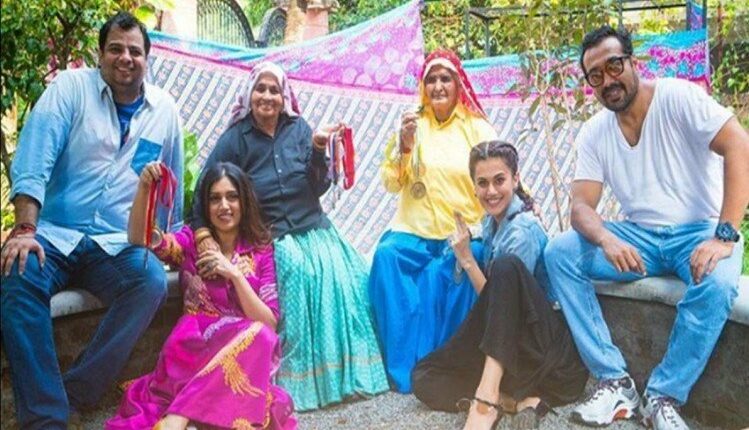 Anurag Kashyap’s movie ‘Sand Ki Aankh’ is making headlines nowadays. A new photo from his film is released in Mid-February. This photo is taken in Punjab. His heroines Taapsee Pannu and Bhumi Pednekar are holding the gun with one hand and making a heart with free hands. This movie is about the world’s oldest shooters from Uttar Pradesh.

Taapsee and Bhumi shared this picture and captioned it with, “Guns and Ghagras! Happy Valentine’s Day #SandKiAankh.”

The film ‘Saand Ki Aankh’ is Directed by Tushar Hiranandani. It was previously named as Womaniya. Producer of this film Anurag Kashyap and actress Taapsee Pannu tweeted that they have changed the name of this movie.  “So, we have decided to not pay the extortion sum of 1 crore to @PritishNandy. He can sit on the title and warm it and hope for it to hatch into something worthwhile for his company for once.” Anurag Kashyap tweeted.

So we have decided to not pay the extortion sum of 1 crore to @PritishNandy. He can sit on the title and warm it and hope for it to hatch into something worthwhile for his company for once

Reliance Entertainment, Anurag Kashyap and Nidhi Parmar produce this movie. “Sand Ki Aankh” is about the lives of world’s oldest sharpshooters, Chandro and Prakashi. Chandro Tomar who is 87 years old is from the village Bhagpat (Uttar Pradesh). She has 30 national championships in her credit. Prakashi is from the same village is the world’s second oldest shooter.

Taapsee recently launched a book called ‘Unread’ which contains 100 poems by 100 writers in English and Hindi. This book is produced by an art website called Platform for Artists. While speaking on the topic ‘How to make your mark on the world?” she said that the role in this movie is the hardest role in her entire film career.

The male lead of this movie will be played by Vineet Kumar Singh. Anurag Kashyap and Vineet are teaming up again after their earlier union at Mukkabaaz. They were also seen together on Ugly, Bombay Talkies and Gangs of Wasseypur. Vineet expressed about his role in Sand ki Aankh by saying, “I have an exciting and important part in Sand Ki Aankh, something I have never played before. Our director, Tushar, saw Mukkabaaz two days before reaching out to me. He was eager to have me on board. I went and auditioned for the role, and landed the part. The film explores the early life of the ‘revolver dad’ and how they become such fine sportswomen. My character has a sports element attached; he is someone who was pivotal to the journey of Chandro and Prakashi Tomar.”