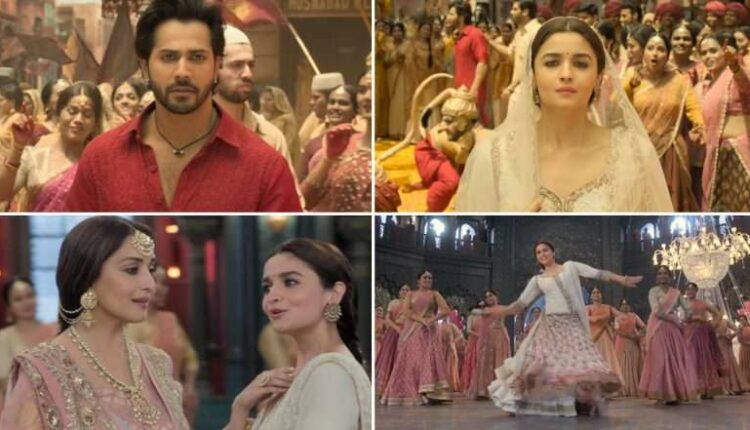 The first song from the most awaited period drama, Kalank is released today at 12:30 PM. The song is titled as Ghar More Pardesiya.  The song is picturised on Alia Bhatt and Madhuri Dixit and Varun Dhawan made some appearances in it.  Madhuri and Alia are looking beautiful in this Kalank song. Varun Dhawan’s look with Kohl eyes will make you stunned.  Alia posted a still from the song and made all her fans restless with the majestic look.

She captioned the photo with, “ A song that gave me sleepless nights, days & months is coming very very soon.. I think you can safely say that I have never been SO nervous for anything in my life. *screams frantically and hides under bed* You may have to send a search party to find me Meanwhile watch this space for more..”

Yesterday, Alia and Varun shared the teaser of Ghar More Pardesiya song which excited all their fans to the next level. Varun wrote, “The first song of #kalank #GharMorePardesiya is out tomorrow. Get ready to witness this spectacle tomorrow and the introduction of where Zafar has grown up”

Alia posted some photos from the Kalank song at 10 am.  She told her fans that the song will go live by 12:30 pm.

Right after the song went live on YouTube, she posted a short video on her Instagram saying ‘And, here it is.’

Amitabh Bhattacharya is the lyricist for this Kalank song. Pritam is the music director for the same. Vaishali Mhade and Shreya Ghosal gave their voice to this song and an amazing choreographer, Remo D’Souza taught the elegant steps to all the dancers.

Alia and Madhuri danced so gracefully that you just can’t take your eyes off them. The song is like the jugalbandi that celebrates and describes Ramayana.  The words are so powerful that you will listen to this song again and again. After the release of this first song, all the audience is just waiting for other songs of this film to release.

How to Root Xiaomi Mi 9 and Install TWRP Recovery