Bigg Boss 13 Confirmed Contestants List: See Who Made It Into Bigg Boss House This Season 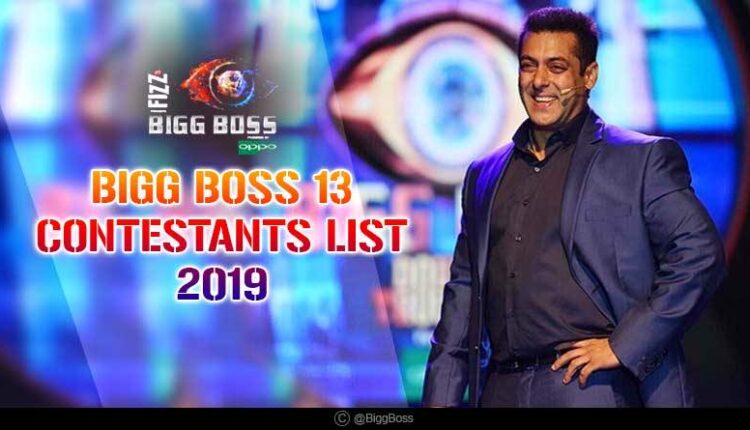 The much-awaited reality shows Bigg Boss 13 has finally been aired on September 29. Host Salman Khan welcomed all the 13 contestants on Bigg Boss 13 to break the suspense that has been breaking the internet so far. And this time at the premiere episode itself, the contestants were given tasks. Even the contestants did not have a choice to select their beds rather they were given different coloured bands for choosing their BFF. And don’t be mistaken, here BFF means Bed Friend Forever.

Big Boss never fails to surprise the audience and this time Salman Khan has been joined in by the gorgeous Ameesha Patel who is going to be the ‘Maalkin’ of the house adding more spice in this season. The first episode will air from tonight September 30 and will definitely create a buzz among fans.

Here are the 13 contestants that you will see in the Bigg Boss house this season.

Siddharth started his acting career in 2008 who worked in popular shows like Love U Zindagi, Balika Vadhu, Dil Se Dil Tak and Humpty Sharma Ki Dulhaniya. He carries the image of an eligible bachelor and let’s see whose attention he grabs. For him, Big Boss 13 will mark his return on television as he was replaced by the producers from his tantrums on the set to his fights with his co-stars. Let’s see if he will be able to control his cool in this season or will be in limelight for fighting with other contestants.

Siddhartha Dey is a first-person in Big Boss to come from a writing background. He is a scriptwriter by profession and has worked with many popular celebrities namely Priyanka Chopra, Ayushmann Khurrana. and long-time with Salman Khan. He also worked the number of reality shows including Jhalak Dikhhla Jaa with his co-contestant Sidharth Shukla. And now how he handles the non-scripted reality show will be something new for the audience to watch.

Being the highest-paid contestant of this season, she became a popular TV star with Uttaran as Tapasya. Interestingly, Rashami and Sidharth Shukla will again come face-to-face in Bigg Boss who was once rumoured to be dating co-star Sidharth Shukla in Dil Se Dil Tak. But later things ended on bad note. And to be more interesting they are sharing beds with each other in the season. Well, how will be the chemistry? Will it go good or bad as before? This is surely suspense!

Dalljiet Kaur made headlines when she left the television show Guddan midway for Bigg Boss 13 as it is a big opportunity for her in respect to her financial needs, especially with regards to her son’s upbringing, after a bitter divorce with Shalien Bhanot. Big Boss will mark the second innings of her life.

The Starplus show Saath Nibhaana Saathiya went on for 4 years which gave her name, fame and confidence to Devoleena. She is popular as the sati-savitri Gopi bahu among fans. There is a strong chance for Devoleena to lift the trophy as television bahus Shilpa Shinde and Dipika Kakar won the last two seasons. Being bold and uninhibited in real life, she made a dramatic entry into the Big Boss where she clearly stated that she is not here for finding love!

Paras Chhabra won dating reality show Splitsvilla 5 and later on became popular as actress Sara Khan’s boyfriend. His life has always been full of controversies who made more news with his affairs. He surely knows how to deal with the politics of reality shows and this will add more spice to this season. He recently played the role of Raavan in Vighnaharta Ganesh.

Arti Singh who is a famous comedian-actor Krushna Abhishek’s sister and niece of actor Govinda. She has been part of shows like Parichay Uttaran, Waaris and more recently Udaan. Arti is an easy-going and chilled out person and it will be great to see here as if she creates ruckus in the house or wins hearts.

Abu Malik is a music composer, performed nearly 10,000 shows around the globe and is known for his witty humour. He recently wrote a book called Rantings of a Mad Man and his son Adaar Malik is also a comedian. It would be interesting to see his equation with Salman Khan in the show who has been friends for years.

Shehnaaz Gill is a Punjabi model, actress, and singer and has many singles under her name. She is quite a hottie and has been featured in hit music videos of popular singers like Ranveet Singh, Garry Sandhu and Guri. Bigg Boss will also see a singer in her this season and will surely bring the glamour quotient in the house. She is termed as ‘Punjab Ki Katrina Kaif’ by Salman Khan.

Asim is a fitness model from Jammu and Kashmir and a quintessential chocolate boy for the girls to drool over. His amazing physique and charming personality will definitely win the hearts of female audiences. Being popular in the model circuit, he has been a part of numerous television commercials. Let’s see how he uses his social skills to survive in Big Boss at the end.

For the first time ever in the history of Bigg Boss, a news anchor will be seen in the Bigg Boss house. She happens to be a news anchor with Tez for the last three years, a popular Hindi news channel of India Today Group. Everyone surely will be excited to see her new side in the coming days.

Mahira Sharma has appeared in numerous music videos and television shows like Naagin 3 and Bepanah Pyaar. Also, she is a popular Tik-Tok star and was last seen in MTV show A Date To Remember. Mahira already revealed about having a bad temper and this will surely give rise to upcoming trouble in the house.

Bigg Boss 13 brings original Saki Saki girl Koena Mitra back in the top of the news who will be seen on screen after a long time. She is known for films like Musafir, Road and Ek Khiladi Ek Haseena. Let’s see how she uses this chance to come back in headline either ending up with controversies or winning hearts of many.

There will surely be many wild card entries in the upcoming weeks which will be the catchiest thing for the audiences.