Vivekananda Institute of Professional Studies (VIPS) is organizing the XV edition of the largest media festival, Spandan 2019 on November 07 and 08 at its campus. This event is organised by the Vivekananda School of Journalism and Mass Communication and will be focused on various themes like 150 Years of Mahatma Gandhi, Water Conservation, Global Citizenship and Hindi Cinema.

Spandan is the annual department festival being organized since 2004. It serves as a platform for media students and pioneer professionals from all over the industry to come under the same roof.

Inaugural Ceremony and the unveiling of Souvenir at VIPS Spandan 2019

This time Spandan is also hosting the fourth edition of the popular Student Film Festival, ‘Cinéphile’, in collaboration with International Federation of United Nations Associations (IFUNA) on the theme ‘Water Conservation’. Juries of the event include prominent personalities like Rajendra Singh (Waterman of India) and Sh. Suresh Srivastava (Secretary-General, IFUNA).

Besides Cinéphile, films will also be screened under the third U-Special International Campus Film Festival.

Spandan 2019 is also staging a two-hour long musical play ‘Dastan-e-Cinema‘ on the 100 years of Hindi Films. Other major attractions of the festival are competitive events like RJ Hunt, Battle of the Bands, Rap Battle, Social Scoop, Ad Mad and a workshop by Terribly Tiny Tales’.

VIPS is affiliated to the Guru Gobind Singh Indraprastha University (GGSIPU), Delhi recognized by the Bar Council of India and approved by AICTE, ISO 9001:2015.

Today, VIPS has grown into a banyan tree, nestling twelve courses and more than 5000 students. It is an institution with high ideals, focusing on the holistic growth of every student. With a mission of making VIPS an exemplary educational Institution with the clear objective of ‘Man Making, Character Building, Nation Building’ as envisaged by Swami Vivekananda.

Related Topics:VIPS Spandan 2019
Up Next 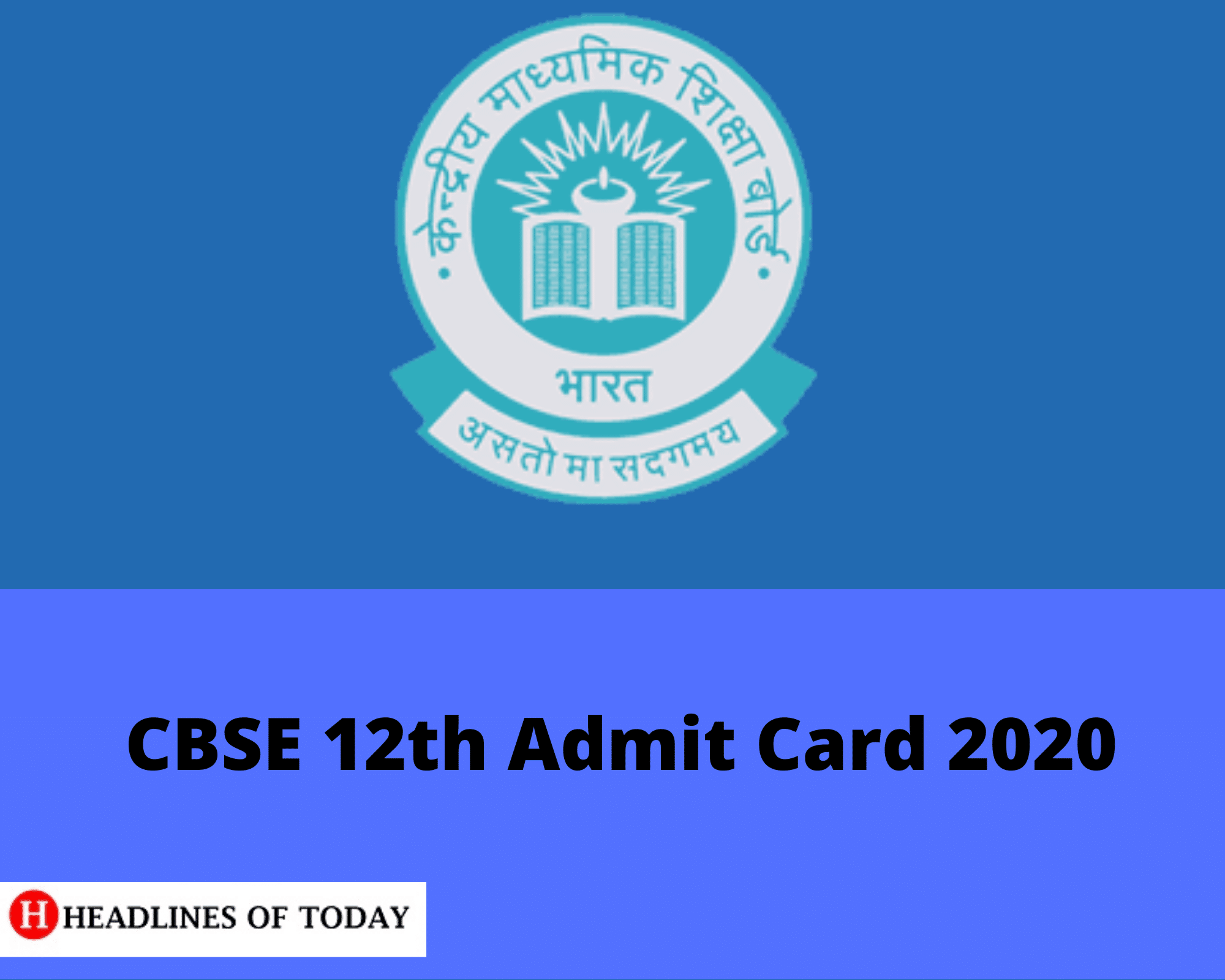 Central Board of Secondary Education, CBSE Class 12 Admit Card 2020 has been released on its official website- cbse.nic.in. The school heads can download the admit card through school login and regular student can collect it from their respective schools. The CBSE class 12 exams are scheduled to be conducted from February 15, 2020, to March 30, 2020. The class 12 board examination will start at 10.30 am and will end anywhere from 12.30 pm to 1.30 pm depends on the respective subjects. For private candidates, the CBSE admit cards expected to be available soon.

The admit cards are verified by the examiner and serve as a student’s ID. Therefore, CBSE Students must carry the admit card of class 12 at the examination hall. Students are advised to reach their respective exam centre at least 30-40 minutes before the reporting time to avoid any kind of hassle.

How to Download CBSE 2020 Class 12 Admit Card For Regular Students?

How to Download CBSE 2020 Class 12 Admit Card For Private Candidates?

CBSE separately release class 12 admit card for private candidates. The candidates can follow the below steps to download CBSE admit cards as it is released at official login.

The following are the sections which are mentioned in CBSE class 12 Admit Card. Students are advised to check the following necessary sections with your admit card so that nothing is missing out. If any student finds any error or any section missed out, they should contact the same with the respective school authorities immediately.

The date sheet of Class 12 CBSE was released on December 17, 2019, and is available at CBSE’s official website, cbse.nic.in. Students can click the direct link below to download the CBSE class 12 datasheet of the year 2020.

In order to pass the CBSE class 12 board examination, students have to obtain at least 33% marks in theory and Practical or Project or Internal Assessment each.

Tips To Prepare for CBSE Class 12 Board Exams 2020 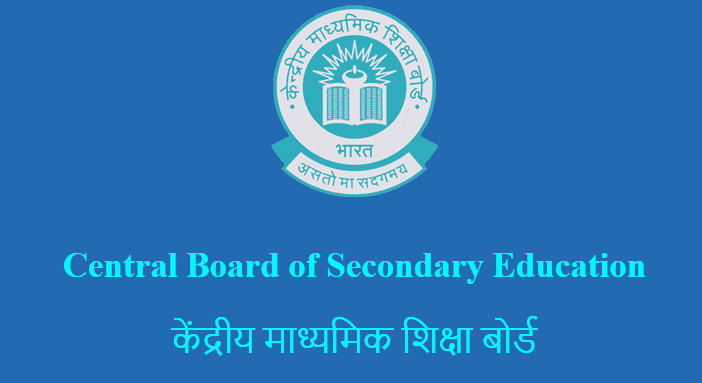 Central Board of Secondary Education, CBSE Class 10 Admit Card 2020 has been released on its official website- cbse.nic.in. The students cannot individually download the admit cards for CBSE 2020 board examinations but can be accessed by schools using the school login ID and password. The CBSE class 10 exams are scheduled to be conducted from February 15, 2020, to March 20, 2020. The exam will begin at 10.30 am and will end anywhere from 12.30 pm to 1.30 pm depends on the respective subjects. For private candidates, CBSE has not yet released the admit cards.

CBSE Students must bring the admit card of class 10th while appearing in the board examination, as it will be verified by the examiner. To avoid any hassle, students are advised to reach the exam centre at least 30 minutes before the reporting time.

The following are the sections which are mentioned in CBSE class 10 Admit Card. It is advisable to check it with your admit card so that nothing is missing out. If a student finds any error, they should contact the same with the school authorities immediately.

The date sheet of Class 10 CBSE was released on December 17, 2019. The same is available at CBSE’s official website, cbse.nic.in. You can click the direct link below to download the CBSE class 10 datasheet of the year 2020.

Tips To Prepare for CBSE Class 10 Board Exams 2020 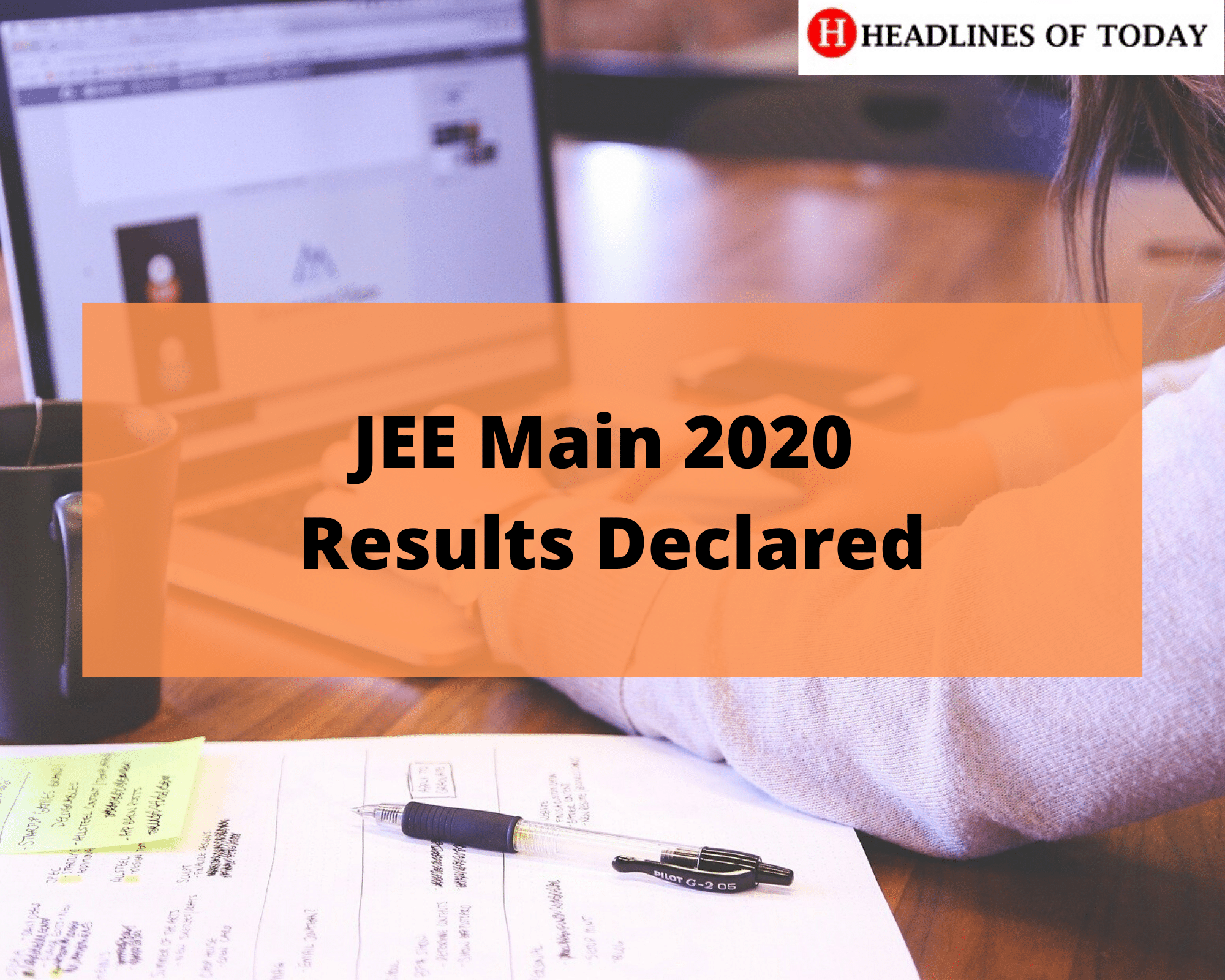 NTA has released the JEE Main 2020 Result for January examination conducted between Jan 6 to Jan 9 on January 17, 2020, at around 9 pm. The direct link for JEE Main result of 2020 has been provided below. The JEE Main results of BE/BTech have been announced for now and for paper B.Arch and B.Planning results will be announced later. Along with the result, the National Testing Agency has also published JEE Main 2020 final answer keys for paper 1: BE/BTech on the official website. The direct link for the same has been provided below.

About 9 candidates have scored 100 percentile in JEE Main 2020 examination this year. Check the table below: 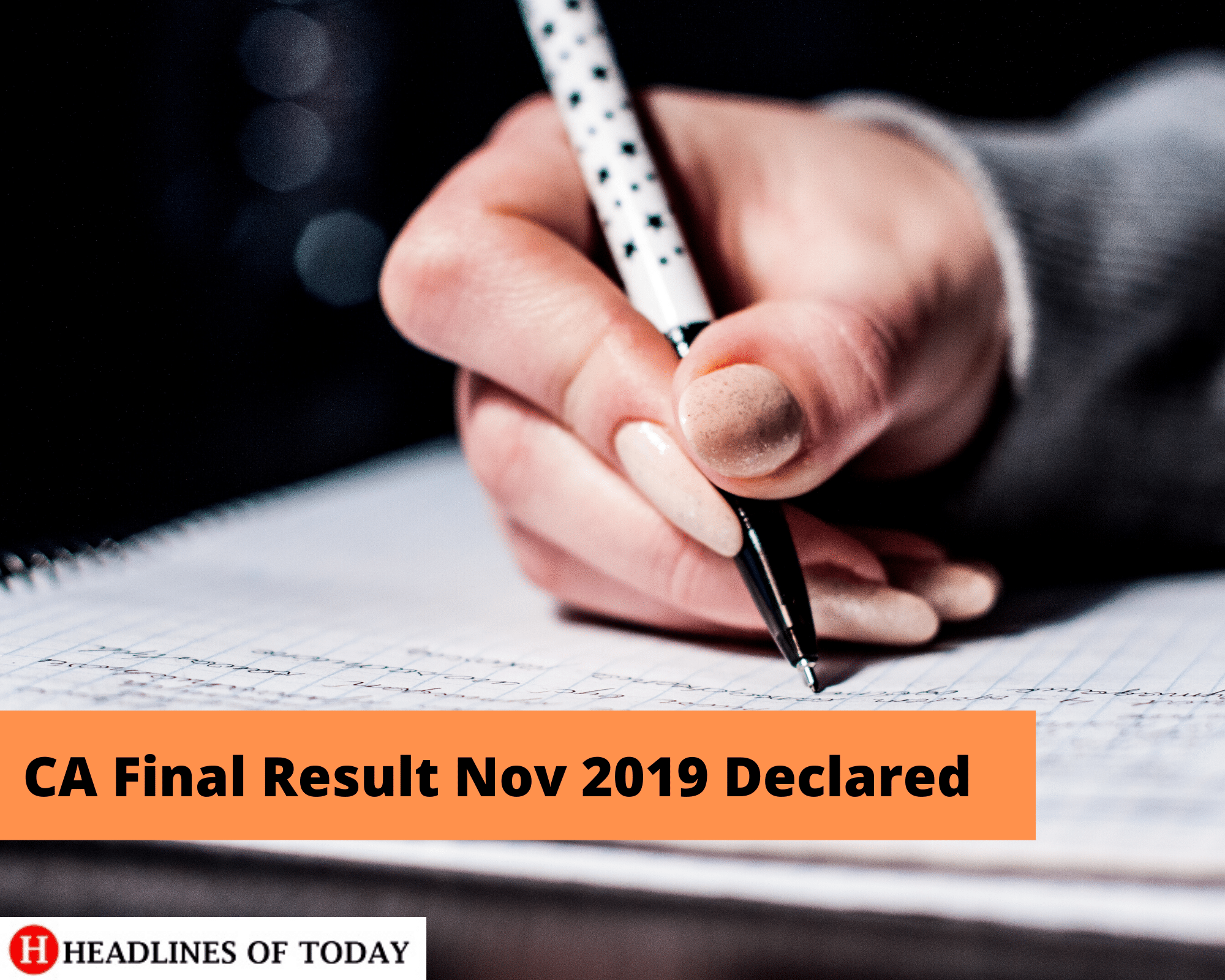 Check CA Final Result Nov 2019 for the old and new course from the following links:

Step 2: Enter the registration no. and the CA examination roll number

Step 3: Download and print the ICAI CA Final Result 2019 for the future reference

Candidates can also get their CA Final Nov 19 results through SMS:

Create a new message as follows:

and send the message to 57575. This SMS facility is available for all mobile services.

Check below the ICAI CA final pass percentage of November 2019 examination for group 1 and group 2 under old syllabus.

Check below the ICAI CA final pass percentage of November 2019 examination for group 1 and group 2 under the new syllabus.

Suryansh Agarwal from Noida and Abhay Bajoria from Kolkata has topped the CA Nov 19 final examination under the new syllabus. Check below the table: 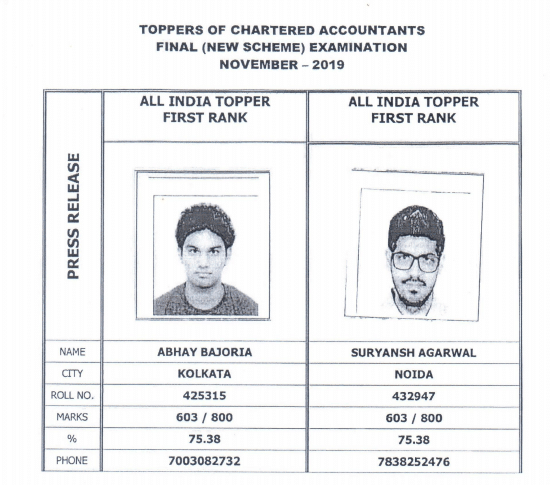 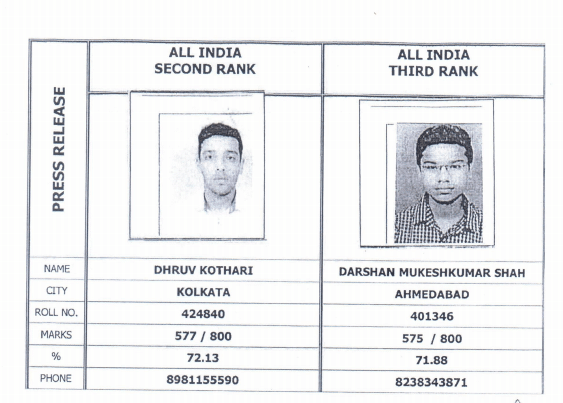 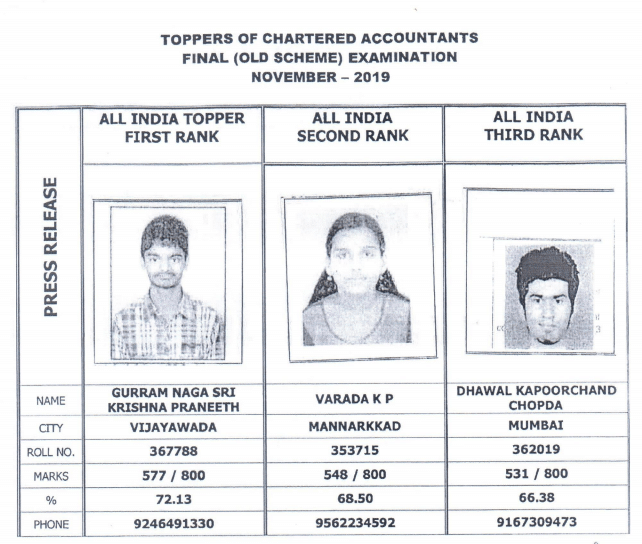 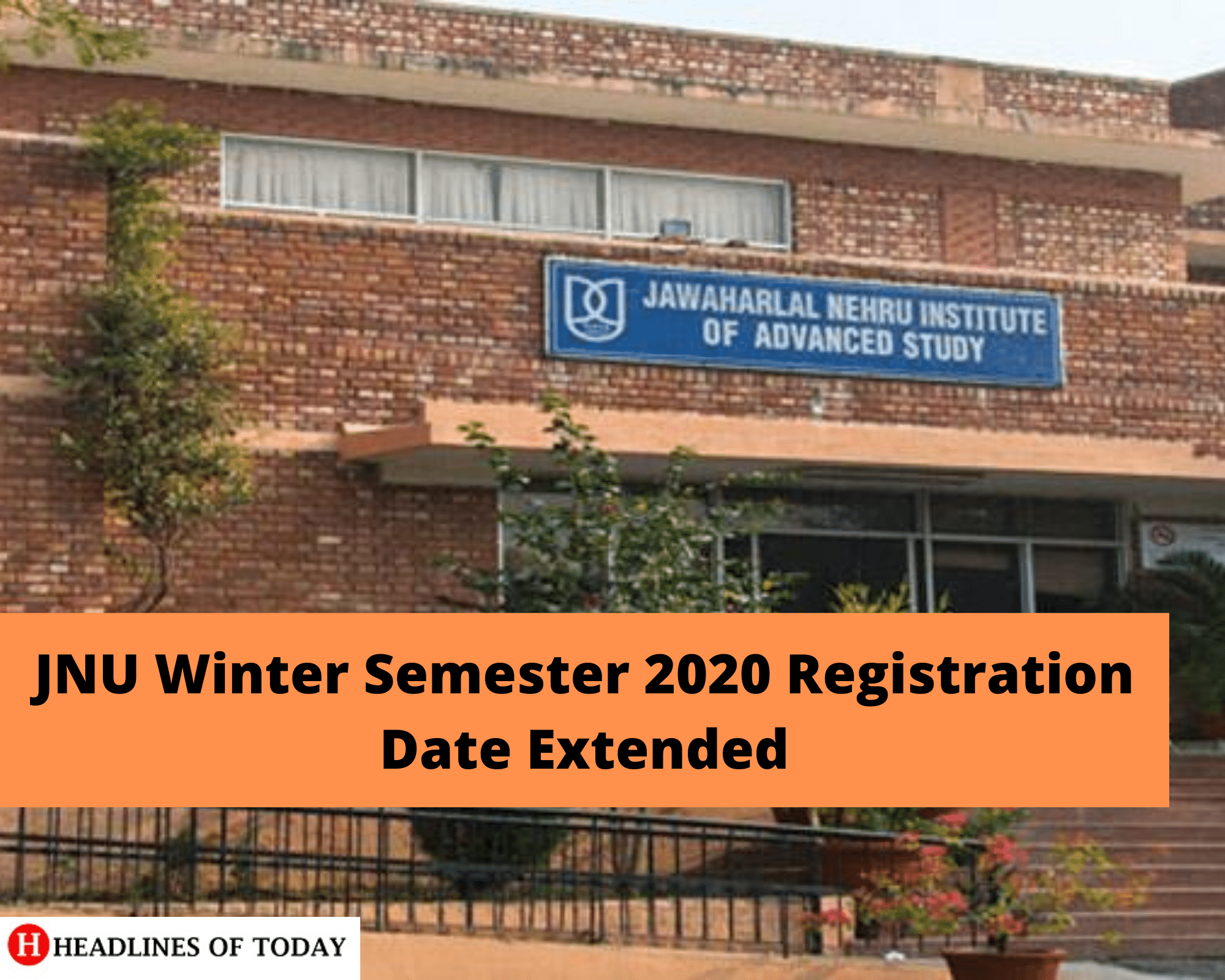 “After that deadline, the VC may consider written requests for registration and grant the permission for late registration, if deemed fit, with the imposition of an appropriate amount of fine at his discretion.”

The university administration had said that the reason behind this decision was that the information and communication service (CIS) systems were severely damaged by the students as part of their months-long agitation against a hostel fee hike.

Last week, the administration officials had issued a notice stating that students would not require utility charges and pay service for the winter semester during registrations.

For foreign nationals, the late fee system is different. Check below the details mentioned in the circular. 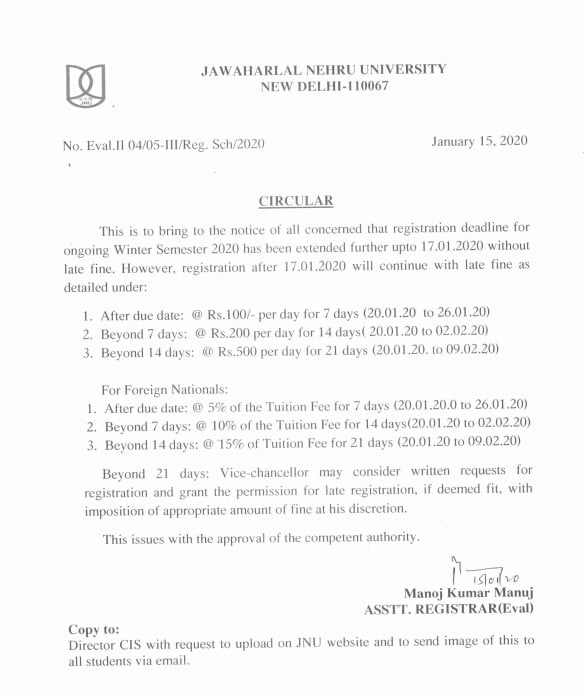 Earlier, JNU VC M Jagadesh Kumar appealed to the student’s parents to advise them to register for the winter semester 2020 else it will lead to loss of one academic year. He told to ANI that more than 50% of students have paid their hostel dues and the classes have been started.