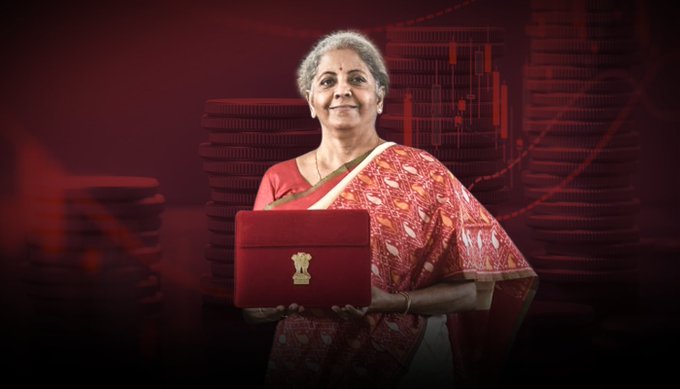 Finance Minister Nirmala Sitharaman presented the General Budget but accepted the slowdown in the economy due to Covid-19 pandemic, but after that, her enthusiasm remained. She claimed that our goal is to create a new India that will be digital as well as ‘Atmanirbhar’ (self-dependent).

The budget has taken special care of the electoral states. Economic corridors will be built for road infrastructure. Highways will be built in Bengal worth an amount of Rs 25,000 crores. 1.03 lakh crore will be spent in Tamil Nadu under the 3500 km National Highways Project. 1100 km National Highway will be constructed in Kerala. 3.3 lakh crores have been provided for the Bharatmala Pariyojana.

A fund of 64 thousand crores has been set up for a self-dependent health scheme. 35,000 crore will be spent on the corona vaccine in 2021-22. Mission Nutrition 2.0 will be launched. Critical care hospitals will be started in 602 districts. The National Center for Disease Control will be strengthened. Integrated Health Information Portal will be launched to connect public health labs. 15 health emergency operation centres will be started.

The income tax slab will remain the same as before, but senior citizens aged 75 years and above will no longer need to file IT returns. It has been proposed to increase the limit of tax audit from 5 crores to 10 crores, then the relief of 1.5 lakh on purchase of the house will continue till 31 March 2022. No penalty will charge for late submission of PF. The government has decided not to take tax on pension earnings.

100 new military schools will be started. Central University will set up in Leh for higher education in Ladakh. Facilities will be improved in 750 Eklavya Model Schools in tribal areas. It will cost Rs 35,219 crore for 6 crore scheduled caste children in 6 years.

One Nation, One Ration Card will be implemented in 32 states. The benefit of the Ujjwala scheme will be extended to 1 crore more women. Water life mission will be launched for urban areas. 1.48 lakh crore will be spent in 5 years on the Swachh Bharat Mission – Urban.

FDI will be increased from 49% to 74% in the insurance sector. 20,000 crores will be invested in government banks, asset reconstruction company and asset management company will be formed to get rid of NPAs (Non-performing loan). The government has said to launch LIC shares.

Agricultural credit target is 16.5 lakh crore in 2021-22. Operation Green Scheme will cover 22 perishable crops. APMC will also have access to the Agriculture Infrastructure Fund. 5 big fishing harbours will be built in cities like Kochi in Kerala, Chennai in Tamil Nadi, Visakhapatnam in Andhra Pradesh, Paradip in Odisha and Petuaghat in West Bengal. Multipurpose Sea-Vid Park to be built in Tamil Nadu.

1.10 lakh crore rupees have been given to the Railways in the budget. 1.07 lakh crores are for capital expenditure only. Railways have formulated the National Rail Plan 2030 to create a future-ready railway system and reduce logistic cost. By June 2022, the Eastern and Western Dedicated Freight Corridor will be ready. The bus transport system will be introduced in urban areas. 20,000 buses will be ready. 702 km metro is currently running. A total of 1016 km of the metro is in operation in 27 cities.

15-year-old commercial vehicles and 20-year-old private vehicles will be scrapped. The fitness certificate will be required for the vehicles. The terms and conditions and how much incentive is required will be issued by the Ministry of Road Transport will issue.

Rs 2.50 on petrol and Rs 4 per litre agricultural cess on diesel. However, this will not affect the common man. If the bank dips then the amount up to Rs 5 lakh will be safe. The next census will be done digitally. Air India will sell. Minimum wage scheme will be applicable for workers.

Two roads projects in Jharkhand have been approved under the Bharatmala Project. Jharkhand will also get the benefit of Mission Nutrition and Amrit schemes. The cities of Ranchi, Adityapur, Chas, Deoghar, Dhanbad, Giridih and Hazaribagh are included in the Amrit Yojana. Jharkhand will also get funds from the centre for the development of these cities. Similarly, under Nutrition Campaign-2, funds have been provisioned for 112 aspiring districts of the country, in which 19 districts of Jharkhand will get automatic benefits.

What are Some Alternatives of PUBG Mobile to Play?